Perhaps because it is attached to so many essential service businesses in Philipstown, the name Pidala is one of the town’s most recognizable, and the assumption is that the family has been rooted here for generations. Although they can’t lay claims to antecedents as far back as, say, the Dutch settlers in the Hudson Valley, or even the Italian post–Civil War foundry workers, the first Pidalas to settle in Cold Spring arrived just after World War II and immediately put their stamp upon the village.

On Saturday, Sept. 20, the Pidala family will be honored with the “Historic Family of Philipstown” award at the Putnam History Museum’s annual gala, taking place this year at the Highlands Country Club in Garrison. 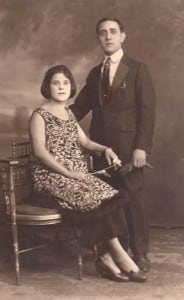 Originally hailing from the Sicilian towns of Mirto and Longi, members of the Pidala family emigrated to the United States soon after World War I, as economic hardships drove many across the Atlantic at that time. Settling first in Brooklyn, family patriarch Salvatore Pidala continued in a line of work he had practiced in Sicily: making violins and mandolins.

One of his sons, Francesco, became an accountant. During a visit to Cold Spring to visit friends and relatives, Francesco met Antonina Ricevuto, who was living on Parsonage Street, then considered Cold Spring’s “Little Italy.”

They eventually married and settled in Queens, raising their family there. Soon after World War II, one of his sons, Salvatore, came up to Cold Spring, along with his uncle, Sebastian “Buster” Ricevuto, to go to a dance. There, Salvatore met his future wife, then Josephine Frisenda. Family legend has it that after meeting her, he took out a coin, handed it to her and said, “Here’s a nickel — give me a call when you turn 18.”

Their ensuing marriage, in 1948, prompted Salvatore to move to Cold Spring, and three of his brothers followed, first Joseph, then Richard and later on Frank. Other family members remained in the city. More weddings followed, as Joseph and Richard married two sisters, Josephine and Mary Giachinta. The fourth Pidala brother, Frank, moved to Cold Spring around 1963 and married Chickie Lamartina. In this way, unions took place among the Pidalas and some of Philipstown’s long-established families. The new families lived all over Cold Spring: Morris Avenue, Hamilton Street and Main.

The post–WWII GI Bill afforded them the opportunity of taking out a loan with which to buy an existing clothing manufacturing business, S & A togs, located in a large structure at the corner of Railroad Avenue at Depot Square. S & A produced clothing for fashion labels largely sold in department stores. Many family members were involved with the business, with Josephine and Mary running many aspects of it, while Joseph and Richard attended to other sides.

The business did well, and they were able to bring over others from their hometowns in Sicily, sponsoring them for their green cards. At its height, there were between 30 and 40 people (almost exclusively women, except for the business owners) working there, sewing, pressing and finishing, then loading the garments onto trucks for delivery to New York City.

Philipstown’s Frank Pidala (of the generation of children of the four sons), who recently retired from decades working at IBM, recalled his childhood helping out in the factory: “My father, Sal, was a presser, my uncle Rich a master stitcher, and my other uncle, Joe, pressed and helped run the business side of things. I filled the bins up, snipped threads off and helped package the goods up for the trucks. I got a nickel for every belt I pressed, drinking Yoo-hoos while I did.”

Frank’s cousin Nina recalled just how hard people worked: “My mother [Josephine, married to Joe] worked very hard, until 3 a.m. some days — because she had to.”

“In wintertime,” recalled Frank, “there was a potbellied stove. On weekends we would have functions in there, with card tables we set up. It was all about family. The money helped, of course, but it was really all about family.”

The once-thriving business began to decline in the 1970s, with the advent of overseas garment manufacturing. In 1983, after four very tough years, the business closed. Even before that point, not all the Pidalas worked in that industry. Frank’s father Sal, who had worked there, became first a railroad conductor and then a postman, delivering mail “from Constitution Drive up to Town Hall.” Others worked at West Point and for Putnam County; some continue there today.

Though there are Pidalas in many walks of life in this area, the name Pidala is now first associated with the essentials of home ownership: oil, electrics, landscaping. As family members describe it, the transition to these trades occurred when it became clear that the clothing business would not be a viable future employer for the next generation.

It became important to become trained in businesses that could sustain them. With the population of Philipstown experiencing the first of many growth spurts, it became evident that the new residents, along with those who had settled earlier, would require this expertise, and so the training was done and the shift was made.

There are an estimated 41 or so Pidala family members currently living in Philipstown.

The Putnam History Museum gala will also honor Lila Acheson Wallace posthumously with the Gen. Israel Putnam Award. The Highlands Country Club is located at 955 Route 9D in Garrison. Cocktails and a silent auction begin at 5 p.m., with dinner at 6 p.m. Visit putnamhistorymuseum.org for more information and to order tickets.

Editor’s note: Background material for this article was supplied by several Pidala family members, as well as the Putnam History Museum.