In the 1940s Mary Einstein Wright served as marketer and stylist for the work of her husband, Russel Wright, the industrial designer who was the progenitor of “branded” goods—in his case, tableware and furniture. She worked behind the scenes but, as a new exhibit at the Garrison Art Center demonstrates, was herself a talented artist. 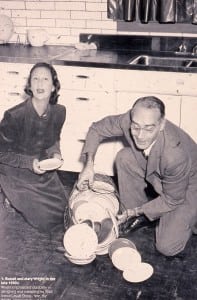 Mary Einstein was in her early 20s when she met Russel Wright at the Marverick Art Colony, where she was studying sculpture. She was among the colony participants who followed him to Woodstock’s Maverick Theatre, where he was designing and directing. Their marriage followed — a partnership in life and eventually business, interrupted by Mary’s death in 1952, at age 48. She did not live to see the completion of their home and studio, Manitoga, on 75 acres in Garrison, now a national landmark.

The work of Mary and Russel Wright is the subject of a new exhibit, The Power of Two, which runs through Nov. 8 at the Garrison Art Center. It features early drawings, paintings, theatrical designs and manufactured items by both artists, some created individually and some collaboratively. Curated by the art center’s executive director, Carinda Swann, and board member Mary Ann Syrek, the exhibit includes many items loaned by the couple’s daughter, Ann Wright, and by collectors Laura and Gary Maurer, among others. Manitoga’s director, Allison Cross, served as consultant.

Swann describes the The Power of Two as the Art Center’s first museum-type exhibition, with many items that have never been displayed. “The more I researched the more I learned just how vital Mary’s talents were to Russel’s success,” she explains. “So we thought it also important to show the 25-year partnership and Mary’s part in it. The two laid the groundwork for today’s astonishing level of lifestyle marketing.”

Ann Wright suggested the exhibit to spotlight her mother’s contributions and showcase her fine-art talent. For Swann and the Art Center, it fit well with the recent Made In Philipstown event, as Russel and Mary Wright were very much “makers.” Manitoga’s contributions, according to Cross, were largely archival research and scholarship, including discussions with the curators as to which objects should be included. The eventual choices focus on three lines that Mary Wright herself worked on: spun aluminum, Oceana (a line made from wood, sometimes in combination with metal or glass), and Country Garden (a ceramic line). Manitoga itself hopes, in future years, to devote more of its site to gallery space. 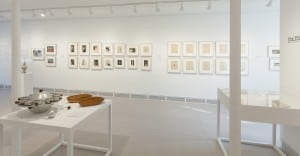 Mary Einstein grew up in New York City; by her late teens she had toured Europe and become part of literary and artistic circles there. Returning to New York, she became a book cover illustrator. In a 1926 letter, the photographer Alfred Stieglitz wrote to her aunt: “I opened your niece’s portfolio. How well I knew that they were not to be looked at casually! The drawings are astounding. The painting extraordinary.”

Russel Wright’s trajectory is better known.  Interested in painting from an early age, he spent a year before entering Princeton studying at the Art Students’ League in New York. At Princeton he became engrossed in set design and construction. After spending the summer at the art colony, he left college and became a professional theatrical designer and stage manager. Once he linked up with Mary, on her advice he shifted to home design. In post-war America he became a name nearly as well-known to the general public as Martha Stewart is today. 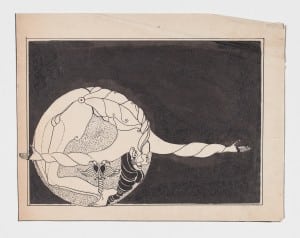 Untitled drawing by Mary Wright, circa the mid-1920s (photo provided)

Mary was the marketing strategist. Beginning with metal designs of circus animals that replicated work Russel had done in papier mache at the art colony, Mary brought items to department stores. They were a hit, and fashion-magazine coverage followed. The Wrights adjusted their design focus, producing functional objects for home use, produced economically but with a design panache.

An accompanying exhibit, The Vision of One, focuses on the accomplishments of the late Aileen Osborn Webb of Garrison, who was instrumental in changing the Studio Craft movement. The exhibit was curated by Geoffrey Platt with consultation from Paul Smith, director emeritus of the Museum of Arts and Design and former director of the American Craft Museum, and assistance from the American Craft Council.