On Saturday (Sept. 19), the Haldane varsity cross-country teams traveled to the site of the 2015 state championships to compete in the second annual Monroe-Woodbury Crusader Classic in Central Valley with athletes from some 110 schools.

In the first heat of the day, the boys ran with athletes from 17 other schools and finished seventh, placing them 27th out of 89 teams at the meet. The finish put them ahead of strong Section 1 competitors such as Rye, Dobbs Ferry, Byram Hills, Pawling, Brewster, John Jay Cross River, Scarsdale, Carmel and Horace Greeley. In addition, Haldane defeated last year’s Class D state champs, Beaver River. 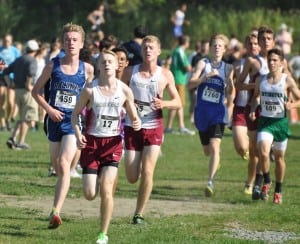 In their heat of 18 teams, the girls’ team finished ninth, which put them in 51st place over all among 81 schools. They finished ahead of other Section 1 teams such as Scarsdale, Rye, Irvington and Ketchum.

Ruby McEwen, running healthy for the first time this season, paced the girls with a 21:36 finish, followed by Taylor Farrell at 21:47. McEwen was 12th and Taylor 14th. Both earned medals.

Heather Winne was next at 25:28, followed by Olivia McDermott (26:37), Abbey Stowell (27:42) and Meghan Ferri (29:01). “I am getting more than I ever have from my girls this early in the season,” said Coach Tom Locascio. “Traditionally they start the season slowly and peak at the right time. If they can continue to build momentum, they will be an extremely strong team when it counts the most.”

Both teams traveled to Pawling for a league meet on Sept. 24 and on Saturday, Sept. 26, head north to compete in Utica.