The Fort to play at Dutchess Stadium

The opening kickoff for the Hudson Valley Fort at 7:05 p.m. on Saturday, Oct. 10, will signal the arrival of professional football at Dutchess Stadium. The Fort is the latest team in the fledgling Fall Experimental Football League (FXFL), established in 2014 with the hope it would become a reliable developmental platform for the NFL.

The league includes two other New York-based teams, the Brooklyn Bolts and the Florida Blacktips, from the city of that name in Orange County. The Fort and Bolts are associated with minor-league baseball teams; the Blacktips are owned by the league.

Until two weeks ago, a fourth franchise, the Ohio-based Mahoning Valley Brawlers, had been scheduled to play the Fort on Oct. 23. But on Sept. 28 the league folded that team, and the Fort now play the Bolts at home that day. It faces Florida in its inaugural game.

The Fort is coached by John Jenkins, a former head coach at the University of Houston and the Ottawa Renegades of the Canadian Football League. In 1997 he was the offensive coordinator for the Toronto Argonauts when they won the Grey Cup under quarterback Doug Flutie.

Bringing their game to a new level

Although some players on the Fort’s 40-man roster have played college football and had NFL tryouts, Jenkins said one of his main tasks will be to “bring their game to a new level” by stressing fundamentals. In an interview on Oct. 5 after an open practice at Dutchess Stadium, he said he believes the best players, including NFL veterans nearing the end of their careers, are the ones who work hardest in practice. 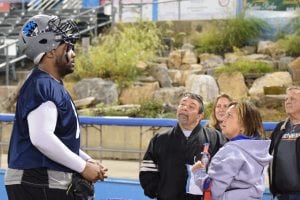 At 6’ 6″ and 340 pounds, Mike Trice towers over fans after a Fort practice at Dutchess Stadium. (Photo by M. Turton)

Most FXFL players see the league as a chance to join or return to the NFL. Jenkins said that with only 120 players active, many will get a close look from scouts, especially if an NFL team runs into injury problems. FXFL says 25 percent of its players received a callback from an NFL team during the 2014 season.

One Hudson Valley Fort player with local ties is Trent Steelman, a 2012 graduate of the U.S. Military Academy at West Point. The 200-pound, 5’11”, quarterback-turned-wide-receiver participated in the Baltimore Ravens’ rookie camp in 2013 but couldn’t join the league due to his military commitment. Steelman set a school record for rushing touchdowns while playing for Army. 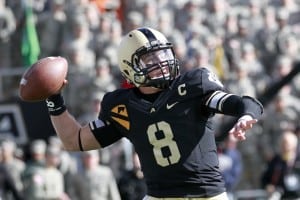 Casey Pachall, 24, a Fort quarterback, attended Texas Christian University and had a tryout with the Seattle Seahawks. “I’m trying to get to the NFL,” he said. “I want to prove to people that I can be a part of their roster. I’m ready to play football.”

Defensive end Nick Richards tried out for the Detroit Lions after attending Abilene Christian University. “I love football,” he said. Richards said he has enjoyed his time with the Fort, noting that football has a way of bringing people together. “We’ve only been together as a team for a couple of weeks, but it already feels like a couple of years,” he said.

The game they love

For the players, it isn’t about the money, at least not yet. (According to the league, they earn about $1,000 per game.) For fans, the FXFL will be a chance to see a group of gifted athletes playing the game they love, and who they might be watching on television next season. Ron Fernandes and Susan Feduke of Poughkeepsie said they bought tickets to the Fort’s three home games.

“We’re big football fans,” Fernandes said. “We like the NFL and also like coming to the Renegade [baseball] games, so this was a no-brainer.”

Feduke said that her father was a New York Giants season-ticket holder who sat in the end zone. “So we bought end zone tickets here,” she said.

The Fort will play two more games after their opener: Oct. 17 against Brooklyn at MCU Park on Coney Island and Nov. 6 at Duchess Stadium (1500 Route 9D, Wappingers Falls) versus Florida. Tickets start at $20; season tickets are available. For more information call 845-838-0094 or visit hvrenegades.com. The team is also on Facebook at facebook.com/hudsonvalleyfort.