Foxtrot to salsa, novices to experts: multiple styles offered to all levels

Nimble on your feet, loose with your hips but at sea when it comes to actual dance steps? Or, does the two-word-phrase “box step” invoke a pounding heart and clammy hands, as you prepare to face your fears for a first dance at a wedding, or a tug towards the dance floor by your significant other at a social event?

Whether it’s simply because dancing has always seemed like fun, or more purposeful, the brand new Fred Astaire Dance Studio, located on Route 9 north of Cold Spring, is ready to step in and help out. After all, their motto is, “If you can walk, we can teach you to dance.”

The studio invites the curious, at any level, to dip their toes into the dancing waters via an introductory offer of two private 30-minute lessons with co-owners Yuriy and Melissa Herhel, as well as a ticket to one of their ongoing Friday night dance party events, at a cost of $60. If you’re enthused about continuing on after that, group and private lessons in varying styles are available. 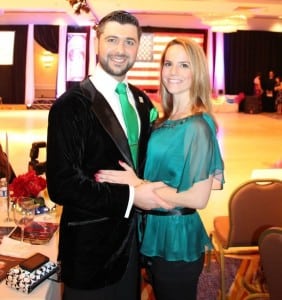 In the Ukraine, where Yuriy Herhel was born and raised, ballroom dancing is a common pursuit — something always in evidence in international ballroom dance competitions, with dancers from Russia and the surrounding lands frequently dominating. Herhel began dancing at age 9 — he calls this a little late: “It’s popular for kids there to start at a very early age.”

Growing up in a small town, Poltava, about 100 miles from Russia, Herhel eventually rose to a level where he was competing in regional, then national competitions; he was a national finalist in the “International Legend” style. Explaining this designation, he says that the faster and more Latin-tinged dances, rumba, salsa, cha cha, fall into this category, while the slower dances are designated “Ballroom.”

Turning professional, Herhel danced in a team which traveled all over Europe and participated in a large outdoor dance festival in Turkey each summer. He then traveled the world, with stints working in South Korea and as a samba dancer on cruise ships. In 2009, former coaches from the Ukraine invited him to teach at their Tarrytown studio. Though he had never been to this part of the world, he decided to take up the offer, arriving that December.

Immediately, he noticed the differences in ballroom dancing here. “I came to Tarrytown and fell in love with the American style, which is more social, less competition,” Herhel notes, adding that his wife’s grandparents are still dancing the lindy at ages 86 and 89. His clients in Tarrytown ranged in age from 6 to 96. Herhel and his wife Melissa met — where else? — at a ballroom dance competition in New Jersey: “I saw her on the dance floor and invited her to slow dance. We got married in Cold Spring and I feel in love with the area — it reminded me of Poltava, so green and beautiful — it feels like a resort sometimes,” he recounts.

Six years after arriving here, Yuriy decided it was time to strike out on his own, and he and Melissa (who was raised in Fishkill) scouted a large area before deciding on their new premises, which have been completed renovated. One steps into a large, rosy-hued room, which the brand new dance floor dominates.

For beginners (who represent about 95 percent of the clientele), the initial two lessons generally focus on three styles each, usually starting with foxtrot, and then drawing from a variety: rumba, swing, cha cha, tango, waltz, merengue, salsa and even “the Hustle.” The Friday night dance parties allow students to practice lots of different dances, to studio CD mixes, with partners — those attending solo will find partners in Yuriy, Melissa and studio assistant Jeffrey.

Each Tuesday and Thursday there are group classes, in different styles of your choice. In addition to those who wish to take a dance lesson, the studio caters to those more forced into it: about-to-be-marrieds, or father-daughters who are nervous about “the first dance” and the “father-daughter dance.” These pairs are given directed instruction on how to pull off those all-eyes-are-on-them dance moments with aplomb.

Demonstrating his teaching technique on an initially reluctant but quickly eager semi-volunteer — this reporter’s teen-age daughter, a dancer with zero background in ballroom styles — Herhel led the way through the basics of the foxtrot, beginning with forward walk, backward walk and side together steps, then moving on to “promenade,” always patient and encouraging. “With new students, especially those without any dance background, we walk through everything first, we don’t scare them; we add the details later,” he explained. 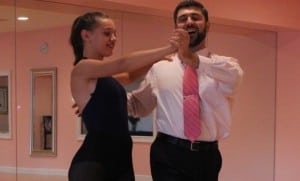 Moving on to rumba, hip action was added, all building on those first steps. Toward the end, with some West Coast Swing, there was bigger movement, more twirls. At the conclusion, the post-first-lesson verdict was: “It was fun. Yuriy was engaging and he adapted easily to the specific pace that I could go at, and I felt like I got a variety of different styles in a short period of time … I’d like to explore it further because it’s fun to understand the traditions of it. I’d like to try samba next.”

Funnily enough, for a dance-loving nation, the studio’s namesake is virtually unknown in Herhel’s home country of Ukraine. “I was very happy when I came here to see the Fred Astaire style, as it’s so different from anything we were doing. I had never even heard his name before — it’s crazy,” Herhel said.

The studio has had a soft opening and has already attracted students from Philipstown, Putnam Valley and Peekskill. They hosted a Cold Spring Area Chamber of Commerce mixer in September and will open their doors officially on Oct. 10, from 4 to 7 p.m. with a free party, with demonstrations and plain old socializing. They are located at 3182 Route 9, right near B & L Deli.

For information or to sign up for lessons, visit fredastaire.com/cold-spring or phone 845-424-6353.