If their bread and butter is commercial web content, Garrison’s Ironbound Films’ jam and honey is their documentary filmmaking work. One-third run by Philipstown’s Daniel Miller, Ironbound intersperses its client-driven work — web-based videos produced for a range of entities, corporate to nonprofit, anything from eBay and Microsoft to the FDR Museum — with self-generated films, documentaries focused on a range of topics, from the re-building of the World Trade Center site to rabblerouser Morton Downey Jr.

On Friday, Nov. 13, Ironbound’s latest effort, a documentary called simply, The Anthropologist, premieres at DOC NYC, America’s largest documentary festival. Occurring at the School of Visual Arts, this screening joins others also taking place that weekend at festivals whose locales include St. Louis and farther afield, Recife, Brazil, effectively turning the weekend into an unplanned launching pad for the film. 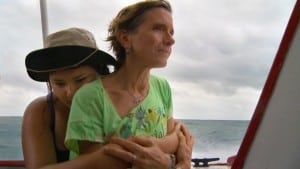 Katie Yegovor-Crate (left) and her mother, Susie Crate, in a scene from The Anthropologists. (Photo provided)

Filmed over a just-concluded five-year period, (Miller jokingly dubs the film, “the Boyhood of the social sciences”), The Anthropologist examines the professional and personal life of Susie Crate, an anthropologist who focuses on human-environment interactions and teaches at George Mason University.

Crate herself is the single parent of a half-Siberian teenage girl, and the film delves into the mother/daughter relationship, shown through the eyes of Crate’s daughter, Katie, as well as Margaret Mead’s daughter, now 76, as a counterpart to bigger picture issues: how societies are forced to negotiate the disruption of their traditional ways of life, whether through encounters with the outside world or because of the drastic effects of climate change — for instance the melting of permafrost, causing vast lakes which have overtaken hayfields in Siberia, the rising sea levels in Kiribati and receding glaciers in Peru, all of which have forced an alteration in the lives of people indigenous to each area.

The Anthropologist was funded — as was another Ironbound film, The Linguists — by the National Science Foundation. This made it easier to work on it long-term, heading out to film at intervals. “We could only really film them when Katie was on school break and they went on field trips,” Miller says. “In fact, we made another film (Evocateur, about Morton Downey) in between breaks in shooting this one.” 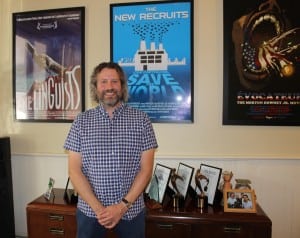 Ironbound Films’ Daniel Miller, pictured in front of posters for several of his company’s documentaries. (Photo by A. Rooney)

Generally Ironbound has three or four people on hand for actual shooting; the crew consists of a sound person, camera operator, producer and writer. Duties are divided up at Ironbound itself, with Miller generally serving as writer and co-founder Seth Kramer doing the shooting and editing while Jeremy Newberger focuses more on the commercial side of the business. Both Miller and Kramer have backgrounds developing films for PBS and similar entities focused on history and public affairs, while Newberger, according to Miller “has a great pop sensibility — knows what’s interesting to people.”

Together the three throw around ideas, all in service of a collective vision of sorts. “We don’t do polemics,” Miller explains. “We love characters with imperfections. Although you might not presume it, all of our films have a lot of laughs. With The Anthropologist you see all the flaws, yet there’s no hypocrisy. Not everyone is perfect, even while earnestly in pursuit. It arrives ultimately at a real trust between us and our subjects. That affects all our work. Even with Morton Downey, where people who hated him got to see his human side, which came from tumult and a rise after failing at a variety of careers.”

Miller was always interested in film, initially from a theoretical perspective. Attending Brown University, he intended to write about it. He discovered the documentary form at college and shifted to creating films, something which still excites him. “There’s a never-ending challenge in telling these stories well,” he says. “For instance, The Linguists is about scientists looking for languages on the verge of extinction. We needed to convey this in a way which would keep people in their seats.”

Ironbound must have found that way to convey, as The Linguists was a big hit at the 2008 Sundance Film Festival and on the festival circuit overall that year. It has had a long life since, helped by its academically-pertinent theme — “it’s in the collection of virtually every college with a linguistics department,” Miller notes.

Ironbound wanted to repeat the experience, and also wanted to do something related to climate change. Crossing those two things together brought them to the field of anthropology. Finding an environmental anthropologist with a daughter presented them with the “notion of offspring of anthropologists: what do they learn about the world, at home?”

Another Ironbound film, The New Recruits, looks at three business students determined to use market principles to solve global poverty. It aired on PBS and was nominated for an Emmy in 2011. Ironbound is already working on two new projects. Detected, a short film, takes a look at a new type of bra that is able detect breast cancer. It will premiere at next year’s South x Southwest Festival in Texas. Then there’s Heading Home, which follows five Jewish Major League baseball players on a trip to Israel in commemoration of the 50th anniversary of Sandy Koufax missing a World Series game because of Yom Kippur.

After its premiere weekend, the new film will embark on its journey through the festival circuit. After that, its future “will be revealed,” Miller explains. “You kind of have to take baby steps. It could be anything; it was made with similar values to The Linguists, so we know its value to academia. Beyond this, how it finds its way in the culture? Who knows? We’re excited to see.”

The Anthropologist will be shown at 9:30 p.m. at the DOC NYC Festival at the School of Visual Arts Theatre, 333 West 23rd St., between 8th and 9th Avenues. For tickets, visit docnyc.net.