Thornton Wilder’s play, written during WWII, could not be more topical

A fear that the tide has finally turned and humanity is teetering on the edge of self-immolation. Refugees massing, with no one taking them in. Devastating geographic changes resulting from weather patterns as wild and veering as an EKG line during a heart attack. A slingshot-wielding psychopath, bent on destruction. A doomsday-shouting prognosticator, part tout, part seer. Excerpts from last night’s 6 o’clock news? Today’s New York Times? Could be, but actually these present-day afflictions are all a part of a play, written over 70 years ago — during wartime, that particular war being World War II — The Skin Our Teeth, by Thornton Wilder. And, oh, it’s a comedy. Well sort of, kinda. 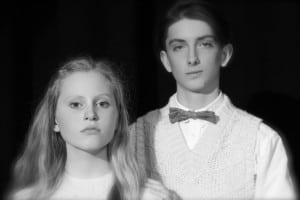 The Antrobus ’children’,who reflect the complexity of the world, as played by ’Saturday night cast’ members Allie LaRocco and Max Mormar.  (Photo by Jim Mechalakos)

It’s a blend of absurdism, apocalypse, vaudeville and Greek chorus, all in service of the tale of an archetypical, through the ages family who survive epic and   minute disasters of the external environment and their internal household, from ancient times to the present. After an antic first act, where the characters include a (talking) mastodon and triceratops and the Ice Age hovers as more than a plot device, the second act takes place on the 5,000th wedding anniversary of the family matriarch and patriarch, Maggie and George Antrobus, and a carnival atmosphere pervades, while impending — think Biblical — floods threaten.

The concluding act takes place in an initially nihilistic post-war era, yet, aptly, considering that it was written in the early years of a war, turns hopeful, as the family’s saucy, scrappy and resilient maid, Sabina, a central character and commentator, announces that “the end of the play has not yet been written,” thereby transposing Wilder’s wish to instill a positive energy during a threatening time into something audiences could latch on to. Or, as the video “teaser” for the show, created by Jim Mechalakos, husband of play director Martha Mechalakos, states: “After all that, we’re still here. Hooray for us!” 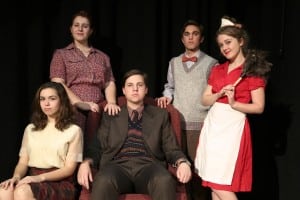 Haldane Drama theatergoers who attended the widely-applauded production of Wilder’s Our Town two years ago will recognize some of the same theatrical devices: the breaking down of the “fourth wall” with actors slipping in and out of character and addressing the audience, the framing of a play within a play — in this case a theater company presenting the play, narration of a kind in the form of radio announcers and stage managers. The Skin Of Our Teeth has a reputation as a difficult, filled-with-foreboding piece of theater, but although those aspects are there, there is also much that is rambunctious, screwball and smile-inducing, and Haldane’s cast, under the direction of Martha Mechalakos, has delved into it, figuring it all out by working through it.

Mechalakos chose the play because, having challenged the students with Our Town and The Crucible over the past two years, she was looking for “more great literature. And preferably something with a big cast and opportunities for actors.” This cast features more seniors than probably ever before, some taking part in their first acting experience and others who have performed in every production since middle school. “I kept coming back to this,” Mechalakos says. “To pick something and put it in a contemporary context is key. It’s amazing how you can just lift a section out and see how it applies to today’s events and is completely relevant.” 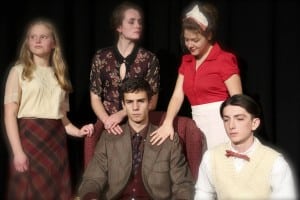 She wasn’t initially certain, recalling that “when I took on my first [directing of a] high school play, an experienced director friend of mine said don’t do Skin of Our Teeth for your first one! But it had nice meaty roles for some of our upperclassman and I thought ‘we can make it work.’ Although some of the lesser parts don’t have many lines, I have tried to give everyone multiple things to do in multiple acts.” As is now the norm, the show has been fully double cast, with two entirely separate casts doing one each of the performances.

Mechalakos wants to make sure that audiences aren’t scared off by the gloom and doom in parts of the work. “I keep stressing that it’s a comedy, and visually, there’s a lot of entertainment, from an 8-foot mammoth to a singing, tap-dancing telegraph boy. … The overall message is one of uplift: to have hope, to know that whatever what, the world is not coming to an end. By nature, things that are manmade, the ship seems to get righted.” 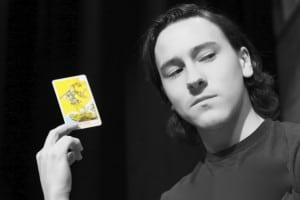 It might always be “by the skin of their teeth” but humanity, and humans, do usually tend to somehow forge ahead, reinvent themselves and meet life’s minor and major crises with resolve, perhaps a very necessary reminder for living in today’s precarious times. Consider Wilder’s words, as expressed through George Antrobus near the end of the play: 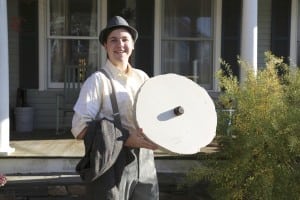 “I’ve never forgotten for long at a time that living is struggle. I know that every good and excellent thing in the world stands moment by moment on the razor-edge of danger and must be fought for — whether it’s a field, or a home, or a country. All I ask is the chance to build new worlds and God has always given us that second chance and has given us voices to guide us; and the memory of our mistakes to warn us.”

The Skin Of Our Teeth will be presented at 7 p.m. on Friday and Saturday at the Haldane auditorium. Tickets may be purchased at the door and cost $12; students are $5; seniors are free. Though there is no objectionable language, thematically this production would be best suited to older elementary students on up; younger children may get fidgety. 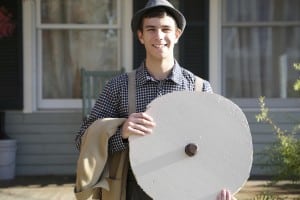