Fovea Editions will host an opening reception for an exhibit of the work of photographer Mark Peterson at Hudson Beach Glass from 5 to 9 p.m. on Saturday, Jan. 9. Entitled Political Theater, the exhibit is a provocative look at the candidates in the 2016 race. Peterson will speak about his work at 6:30 p.m.

“Politics is theater,” Peterson has said. “Each politician has what is called his or her stump speech, like an actor that goes on stage and says the same lines to a different audience each night.” 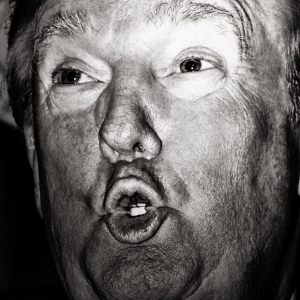 Based in New York City, Peterson has published his photography in the New York Times Magazine, New York Magazine, Fortune, Time and Geo, among other publications. He has spent the past year on the campaign trail, and his black-and-white, strobe-lit photos are designed to evoke what he sees as its carnival atmosphere. “Personally, I’m very frustrated with the political system we’re in, and that things seem to be like a soccer game — like a kid’s soccer game,” he told the New York Times.

Hudson Beach Glass, which is supporting the exhibit along with Beacon Fine Art Printing, is located at 162 Main St. in Beacon. The exhibit runs through March 16.