Barney Molloy, who served on the Cold Spring Planning Board for more than two years, including as its chair, is one of three candidates for two seats on the Village Board. Molloy ran for mayor in 2015 but was not elected; he also ran in 2013 but withdrew. He is running under the V.O.T.E. Party. We have conducted similar interviews with candidates Lynn Miller and Steve Voloto.

All three candidates will participate in a forum sponsored by The Paper/Philipstown.info at 7:30 p.m. on Monday, Feb. 29, in the music room at the Haldane School; the election is March 15. Molloy’s responses have been edited for brevity.

Why are you running for village board?

There’s some frustration and disappointment over what we’ve seen evolve over the last nine or 10 months. Many of the issues that I brought forward remain on the table and haven’t really been addressed. They’re just as valid, just as pressing, just as necessary as they were a year ago — if not more so.

What are three important issues that the Village Board must address?

The need for long-term planning and asset management. We need multi-year and capital planning. Some of our senior people are approaching 20 years of service. Our village clerk, highway supervisor and water superintendent have expressed varying degrees of interest in pursuing other opportunities or retiring. How are we going to address that? It hasn’t been discussed. And there’s a revenue problem. Realistically our fixed expenses are going to exceed the $1,800 tax cap. Again, I don’t see any discussion taking place in public. I don’t see anybody being reasonable or anybody leveling with the taxpayers about what that means going forward. Maybe they don’t understand it. 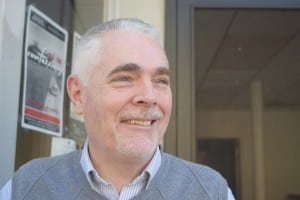 What qualifications, skills and experience make you a strong candidate?

I participated on the Emergency Planning Task Force, which opened a lot of questions to be addressed in the Comprehensive Plan and LWRP [Local Waterfront Revitalization Plan]. My service on the Zoning Board as “the shed” was coming to full flower—an issue that illustrated weaknesses in how our processes work. And two-plus years on the Planning Board (dealing with) the Butterfield Project. That compendium of work indicates my skills, ability and accomplishments on behalf of the village.

What is one area where you need to improve?

Probably the one I’ve struggled with my entire life—patience. I have a tendency to look at a problem, gather the facts, invite conversation and discussion, but then we have to move on. We have to decide on a plan of action and we have to execute it. Sometimes I get a little impatient because when you do all the fact-gathering and you make a decision, you have to implement it.

Has the Village Board become too politicized?

Yes and no. Given what a Village Board’s responsibilities are, it’s way too partisan. If you have an opinion, it seems you pursue that opinion single-mindedly to the exclusion of everybody else’s opinion—and it isn’t necessarily fact-based. I found during Butterfield that people would articulate a position that really had no basis in fact or law; that isn›t supportable. And I think that carries over to the Village Board. If you look over the last nine months at some of the management, transparency and process—it’s as bad as it’s ever been. People may inaccurately assign that to politics or partisanship when it might just be more [about] competence and integrity.

What is one aspect of village business that interests you personally?

Asset management and capital planning. I have no idea where this village will be in five years. As far as I can see I’m one of the few who even asks that question.

What personal traits make you a good candidate?

My ability to maintain an even temperament, for the most part. My ability to research, to work with others. My demonstrated leadership ability—working on the Butterfield Project and other projects. I’m fairly calm and level-headed [although that] doesn’t mean I always agree.

Cold Spring faces a tax cap of 0.12 percent for the 2016-17 fiscal year. Can village spending be trimmed?

The tax cap is basically a Ponzi scheme. It’s been the state’s way of pushing costs down to local municipalities, telling them to live within their means. Meanwhile there’s been no mandate relief, no revenue sharing. Aid to municipalities has been cut to the bone. I don’t think the tax cap is sustainable. Even the governor says he doesn’t want to give out rebate checks anymore under the cap. He wants to make it a tax credit that taxpayers have to apply for. So he knows it doesn’t work.

What are your thoughts on cost saving through streamlining of local government?

Part of it is where the village could save money. Our spending on legal services is pretty much out of control. There’s a default to always go to the attorney, and they don’t pick up the phone unless the [billing] clock is running. There’s an opportunity to manage legal costs more efficiently. Where are we with the fire company? We need to deal with that issue; I think [there could be] some kind of consolidation or shared economies with fire services. The police represent a $500,000 hit in our budget. I’m not saying eliminate the police department, but there’s no way you can’t find ways to manage an item that comprises 30 percent of your budget more cost effectively.

What is your view on whether the Cold Spring election should be held March or moved to November?

I’m not supportive of moving it. It should stay in March. Look at what we’re facing. It’s a presidential election year. The circus is coming to town. I’ve seen this impact other small municipalities. Local issues fall to the bottom of the pail. By the time you get through November, everyone’s exhausted. Nobody wants to talk about local issues.

People need to pay more attention to the state of the village. In March you can focus on what’s important here; you need more involvement. November [elections] mean you’ll get less. [I disagree with] the argument that you’re going to have new trustees who have to get their feet wet and can’t deal with the new budget. You should have budget conversations, adjustments throughout the year. You can start in October. You’re always going to have new trustees—they should study the budget [before being elected], not get up to speed on the taxpayer’s dime.

What do you do to relax? What is recreation for you?

I have been an avid kayaker for 20 years. That’s part of what drew me to Cold Spring 25 years ago. I’ll be leaving here shortly go to kayaking pool sessions down in Ossining. My roll is a little bit rusty!

What is the biggest reason why should Cold Spring residents should vote for you?

I have a proven record and demonstrated history of managing issues effectively. A lot of the [current] issues I raised in the last election. Some may have been addressed. But like I said last year: show us a plan. How are you going to achieve results? My record demonstrates I can do that.