Documentary to be shown March 25

The Newburgh Sting, a 2014 documentary about four men lured into a plot to bomb Jewish centers in the Bronx, will be screened at 7:30 p.m. on Friday, March 25, at the First Presbyterian Church in Beacon as part of the Movies That Matter Beacon series. The church is located at 50 Liberty St. 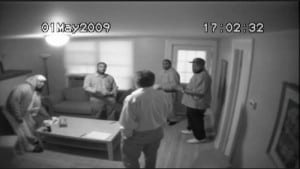 In surveillance camera footage, FBI informant Shahed Hussain, shown with his back turned.

The documentary, directed by Kate Davis and David Heilbroner, was an official selection of the Tribeca Film Festival and later aired on HBO. The directors made extensive use of government surveillance video shot during the year in which an informant presented the plot to four Newburgh men, offering them $250,000 and supplying them with the weapons to carry it out. The film builds a credible case for the entrapment defense.

A discussion will follow the film. The series is sponsored by First Presbyterian Church of Beacon, the Beacon Peace Awards Foundation, the Beacon Independent Film Festival and the Southern Dutchess NAACP. The screening is free, although donations are accepted. For more information, visit moviesthatmatterbeacon.org.