Lecture on April 21 will include live music

The cultural and urban historian Stephen Petrus will speak at 6:30 p.m. on Thursday, April 21, at the Beacon Sloop  Club on New York City and the American folk music revival of the 1950s and ’60s. The event will include live music organized by the American Center for Folk Music as well as a circle of song. 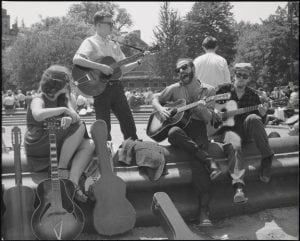 Hear the stories of a variety of characters, including Izzy Young of the Folklore Center, Mike Porco of Gerde’s Folk City and John Hammond of Columbia Records, and performers such as Pete Seeger, Bob Dylan and Dave Van Ronk who brought a new style — largely traditional and rural — to urban audiences.

Petrus, a research fellow at the New-York Historical Society, in 2015 curated the exhibition Folk City at the Museum of the City of New York and co-wrote an accompanying book, Folk City: New York and the American Folk Music Revival.

The club is located at 2 Flynn Drive. For more information, visit beaconsloopclub.org or call 845-463-4660.