The macro and micro of Danielle Martinelli’s paintings

In shifting gears as a practitioner of one art form to another, Danielle Martinelli released the one in which she had a rigorous formal training and embraced another, where the lack of same provided her with a wider freedom to explore. A former dancer and choreographer (she still choreographs) initially schooled in ballet, she is now a painter. “I don’t have formal training in painting — I kind of love that. I like to explore things on my own, finding my way. I think there’s a place to be that as a painter.  I couldn’t paint a decent replication of something but the abstract form is about communicating an idea,” she explains. An exhibition of “New Works” by Martinelli will be on display at the Desmond-Fish Library from May 21 through June 4, with an opening reception on Saturday, May 21, from 7 to 9 p.m. This solo show explores “how systems form, when and where they break down and how the tension between growth and decay balance life,” according to exhibition notes.

Martinelli’s work, some done on canvas but most done on wood, is large in the most obvious scale — “They’re pretty big considering how small the drawings are” (one is 6’ by 4’; working on it consumed over a year), Martinelli says, but extremely detailed, intentionally so, as the yin and the yang between micro and macro: how systems form and then break down has always been at the root of Martinelli’s curiosity, translated into her art.  It started early, she recalls, beginning in her northern California childhood, “The micro/macro thread goes way back: seeing the veins in leaves — it was almost too much for me how interesting it was — pus and scabs too! I’m the kind of person who is always looking for commonalities, where things connect, how all forms of life come from the same compounds, how the same circle can make so many different patterns.”

Art-making came naturally to Martinelli: “As a child I just painted, exploring how colors were coming together. It evolved into drawings on top of paintings.  I love looking at things on a cellular level — at systems of circles which form a larger body of space.  I’m inspired by cancer histograms, am totally fascinated by astronomy, energy, dark matter, black holes — when you pull back and zoom in, unable to discern a difference.  That’s what I’m exploring right now with these current works.” 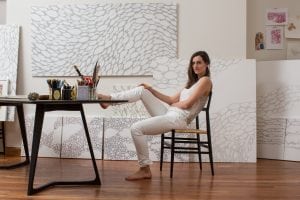 Martinelli prefers working on wood, “it feels very stable, it presses back and the abnormalities of it: the grain, the divots remind me of working with dancers, because what it [the choreography] looks like on their bodies as opposed to my vision is always interestingly different. Painting on wood isn’t tailored, it’s unframed so paint drips over and down the sides which gives some sense of it continuing to go on — a limitlessness.”  The misperception of barriers extends beyond the physical realm, “I try to reach out of where things are similar and go toward things we can’t see, which aren’t empirical; trying to see ‘beyond.’ ” The shift from canvas to wood echoes that of ballet dancer to choreographer, in a sense, as Martinelli defines it without stating it overtly, “I was very studious, yet always was that kind of dancer whose stood out because her hair was falling out of the bun. With choreography, all of a sudden I felt like I had a voice: I’m going to take this arabesque, tweak it, have it come out my way, and that’s good.”

Martinelli works on her paintings in her Garrison studio, always accompanied by music — “Bach or 2Pac, but my favorite is Philip Glass — with his music there’s a theme, then there’s oscillation, and I think that’s what’s happening in my brain when I’m working, as a choreographer and as a painter.” Someday, Martinelli intends to combine the two art forms — at times she thinks about one while pursuing the other. “I have ideas for them to come together: a painting on a wall, a dancer comes in, in real time, and starts filling it out.” Separately, though, there are more similarities than might be readily apparent, as she has noted, “essentially, painting and choreographing are one and the same. I am a human commenting on my human life. It’s just a distinction of whether I’m working with bodies or paint.” 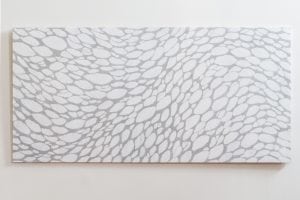 Juggling the time and intense concentration her work demands with some work choreographing (lately short pieces and videos) in New York City, and the raising of two elementary school-aged children, makes for a divided life, as artist and mother, which, when there is truly a balance between these strands, suits Martinelli, who holds an undergraduate degree in political science from UC Berkeley and a Master’s in dance from New York University, just fine. The length of time it takes Martinelli to complete a work precludes the production yield necessary to fit within the parameters of commercial success. But that’s okay, because for Martinelli it’s about the process. She explains, “It’s not that I don’t want to put the work out there or talk about it, but I want it to be authentic and I’m not ‘efficient.’ I enjoy the work and hate thinking about how to make it into a career. I’m a successful person because I’m doing what I want.”

Martinelli and her family moved from Park Slope to Garrison five years ago. “Even though we loved Brooklyn, we thought ‘this is a paradise’ when we visited and we never looked anywhere else.” In almost-terrible timing, she was out experiencing the beauty of the area, hiking with her son last week, when, losing footing on a steep section of a trail, she wound up with a broken shoulder. With her right arm in a sling for the next two months, she is out of painting action for that time. Luckily, all of the works for the exhibition had already been completed.

For more information visit daniellemartinelli.com and desmondfishlibrary.org or phone the library, located at 472 Route 403, at 845-424-3020.