Reservations for Mount Gulian event due May 27

The Mount Gulian Historic Site will welcome President Theodore Roosevelt — or a close approximation — at its 21st Annual Historical Dinner from 5 – 9 p.m. on Saturday, June 4.

The fundraiser will include an early 20th century-inspired dinner and the presence of the author, explorer, naturalist and 26th president Roosevelt, as portrayed by Peyton Dixon of the American Historical Theatre. 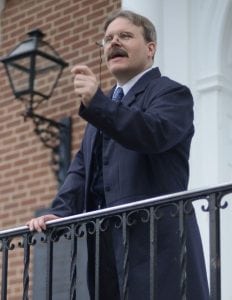 Roosevelt will talk about his life, career and accomplishments, including his domestic political agenda known as the Square Deal and foreign policy. Guests will have the opportunity to meet the president and ask questions. Following the assassination of President William McKinley in 1901, Roosevelt, then 42, became the youngest president in history.

The dinner, catered by Bridgecreek Catering, will be based on recipes and foods favored by Roosevelt. Period music will be performed by Julie and Jim Paradies.