What’s the difference between stress and anxiety? What’s developmentally normal and what’s not?  Learn to identify symptoms, handle anxiety-driven behaviors in effective ways and help mitigate its effect on child and adolescent physical well-being, academic learning, and socio-emotional growth. These words on the flyer previewing a Haldane-GUFS PTA Learning Differences Committee presentation on April 26 at Haldane drew a packed room full of parents, obviously concerned about these issues.

Presented by Dr. Katie Thorpe Blaha and Dr. Jarell Myers, both postdoctoral fellows in clinical psychology at New York Presbyterian Hospital in White Plains, the two speakers alternated in speaking to the group. After ascertaining that the attendees included both parents and educators, Blaha began by describing anxiety itself as a “naturally occurring emotion, which can be helpful and important, involving physiological, emotional behaviors and cognitive responses to a perceived existential threat.” These perceived threats promote “flight, fight or freeze responses, designed to keep us safe,” she said. While noting that some anxiety is good, in fact an “optimal level of arousal helps us reach peak performance,” more than that can impair performance and it becomes a problem when it occurs in response to cues that aren’t actually dangerous.

Getting down to the statistics cited: anxiety disorders occur in one out of five children, and up to one in four adolescents. The median age of onset is six, and 60 percent of children diagnosed have more than one diagnosis. In the seesaw of nature versus nurture, in terms of what causes anxiety disorder, nature can include a “slow to warm” temperament, behavioral inhibition and family history of anxiety disorder while nurture can contribute by well-intentioned but ultimately the wrong thing to do “rescue” of the child and “overlearning,” or practicing shaping behavior to avoid the triggers rather than dealing with them more directly. For instance, with “rescue,” a child is promoted to engage, gets anxious, expresses that distress or tries to avoid it and an adult steps in and consoles or supports the avoidance and in this way, expressing distress or avoiding what’s causing the fear is negatively reinforced. Negative reinforcement can cause a behavior to happen more because it makes an unpleasant stimulus go away. 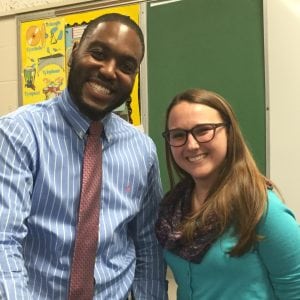 Myers got more specific, mentioning that anxiety disorder can show up in the home or at school or in the community — anything from not sleeping in their own bed to no expression of wanting to go on playdates, not raising a hand in class, to generalized worries about something bad happening. Noting that “appearing inattentive or distracted in the classroom can be many things,” he said that anxiety behaviors to look for include a child who is constantly scanning the room to make sure it’s safe.

The discussion then shifted to the ‘What do we do if anxiety shows up?’ mode. “The key is having kids face their fears. Model behavior, praise courage and briefly — emphasis on briefly — attend to a child in distress, or ignore the child when in distress,” Myers said, with both doctors allowing that this can be very hard for parents to do. Nevertheless, said Myers, “Continue to hold reasonable expectations. Expect that the child will eventually be able to face and master their fears. Reach out to teachers and others involved adults to try to problem solve.” Speaking to the teachers and school administrators in the room then, and in answer to a later question, Dr. Myers called it “important that you are giving the child the same advice as the parents are.” Blaha discussed “scaffolding,” which is making initial accommodations to empower the child to take steps to conquer anxiety, make things “a little bit safe.”

The tools with which to do this are routines — developing them and sticking to them and creating safety in the structure of having that routine. Plan ahead and rehearse for any situation where the child may encounter a trigger. Make a script, practice it, let them feel they’ve mastered it. Parents were told to reduce accommodating their children. Stop making phone calls for them or driving them to school because being on the bus makes them anxious, insisting that they continue with soccer practices that they resist going to. Though not stated, it was obvious that the doctors were not talking about situations with a clear threat, like bullying or things like it, overtly causing a very real fear.

Addressing the ‘How do we know when a kid needs help?’ question, Blaha answered: “If they’re unable to fulfill their roles, they are functionally impaired, and we’re talking about just during periods of transition, when fears naturally occur. As for treatment options, there are three routes: cognitive behavioral therapy (CBT); medication; or a combination of both, the latter having met with the best results. Blaha said the decision of which course to follow is a “totally individual one. Medication can be useful if CBT isn’t helping, but we look at using in on a limited basis, time-wise, adjunct to CBT. Perhaps we think of one year of achieving milestones, a year which takes them through transformations, like the change of a school year.”

Questions from the audience followed; one being: What if by pushing the child to face fears, they implode? Protocols can be remarkably powerful. Do it gradually, though. If your child is terrified of dogs, don’t take them to a dog park. Get a sense of how scared they think they will feel, then see how scared they did feel, and talk about it, Myers suggested. For the teachers present, in reply to a question about how best to manage “a panic attack in the classroom when you’re tending to 20 kids?” Myers advised that “the best thing is to cultivate a sense of predictability surrounding the anxiety: have a coping plan in place; it could be deep breathing, or limited sit-out time outside the classroom, although a safe place in the room is always better. Be sure to reward use of coping skills.”