A political “tracker” who claimed he was hired by the state Democratic Party to follow a Republican candidate for Congress in the 18th District, which includes Philipstown and Beacon, was fired after he allegedly took his duties too far, contacting the candidate’s wife, visiting their home and peeking in a window.

Phil Oliva of Somers is one of the Republican candidates challenging U.S. Rep. Sean Patrick Maloney (D-Cold Spring) in the November election. In a 16-minute video posted at the conservative website The Daily Caller, a young man attempts to question Oliva on the street while filming with a handheld video camera. Oliva, an aide to Westchester County Executive Rob Astorino, was apparently on his lunch break. One of Oliva’s co-workers filmed the encounter.

When asked to identify himself, the young man replies: “My name is Yougourthen Ayouni and I’m a tracker… I’m trying to see our fellow [potential] congressman who’s running here… I’m a fellow constituent, as well.” Ayouni explained that his “American name” is Johnathan.

When asked if he works for Rep. Maloney, he replies: “No, the Democratic Party.”

When asked if he gets paid to “track,” Ayouni replies: “I work for the Democratic Party, so yeah.” However, he says he was not hired nor is paid by Maloney.

In the video, Oliva is shown sitting on a bench when he is approached by Ayouni and questioned and later followed down the street. 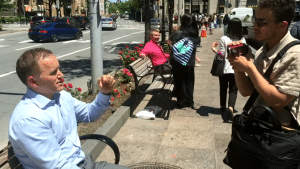 The candidate accuses Ayouni of violating his privacy, and that of his family, claiming his wife said she was contacted by Ayouni.

It is not uncommon for political parties to assign staff members to shadow opponents at campaign events. However, Oliva says Ayouni crossed the line when Oliva’s wife, Jessica, saw him looking through a window into the kitchen of the couple’s townhouse, where they live with their three children.

“I never reached out to your wife, actually,” Ayouni says, when Oliva confronts him. “I think I followed her… I acknowledge I contacted the company she started but not [her] directly.”

Asked if he has driven by Oliva’s house, Ayouni responds: “Yes, I have… I haven’t come to your house; I’ve driven by the road you live on… I wanted to see if you were out walking, to ask you a couple of questions.”

In the video, Oliva tells Ayouni he has taken his assignment to an unacceptable level.

“I think most people would say that’s completely out of bounds,” he says. “Can you understand that [my wife] is completely freaked out?”

Oliva continues: “Johnathon, let me tell you something: This is what people hate about politics. I get people all the time saying ‘You should have someone planted outside Sean Patrick Maloney’s house because he doesn’t live [in Cold Spring], he lives in New York City’ – and I’m not going to do that because that’s what people hate about politics… I’m going to leave him alone. His family is off limits.”

After the alleged peeping incident, Oliva complained to the Somers Police Department. The New York Democratic Party says it has fired Ayouni. “It’s behavior that is unacceptable to us and will not be tolerated,” Executive Director Basil Smikle told the New York Post.

On June 22, Maloney said he had asked the New York Democratic Party to turn over the footage to Oliva. “As I’ve said, this young man clearly crossed the line and while he never worked for our campaign, the New York State Democratic Party was right to fire him and they should send whatever they have over to Phil,” he told Westchester 12 News.

According to the New York Daily News, Republican Kenneth Del Vecchio, who faces Oliva in the June 28 primary, said he and his wife also have been approached by Ayouni, who recorded on his cellphone video as he asked the candidate where he stands on issues like abortion. When the candidate said he’d close Planned Parenthood offices, Ayouni turned to Del Vecchio’s wife and asked what she thought.

“I hardly considered the guy a threat,” Del Vecchio told the Daily News. “I felt it was very inappropriate and annoying and a pathetic attempt by the Democratic party to use these kinds of abrasive tactics.”