Meteorologists expect 2016 to be the most active hurricane season since Sandy ripped up southeast New York in 2012 and Irene and Lee clobbered the Northeast in 2011. While hurricane season generally starts in June, Weather Underground says the storms appear to be “backloaded to late summer,” which continues through Sept. 21. In other words — right about now.

The American Red Cross is calling the Louisiana inundation the worst disaster since Katrina. Watching fatalities there rise with the floodwaters — so much bad weather is connected, with Delta storms raging up the Atlantic seaboard and hurricanes being “seeded” by storms off western Africa — it’s time to get real about disaster preparedness. Even without a hurricane, heavy rain, snow or blackouts could lie ahead.

Get with the program

First, get programmed. Sign on for updates on hazardous storms by texting GETEMERGENCY to 90999, or by searching “Red Cross Emergency” in Apple Apps or Google Play. Federal Emergency Management Administration (FEMA) alerts are at fema.gov/mobile-app. A hurricane warning means one is expected within 36 to 48 hours; a watch means it’s possible. 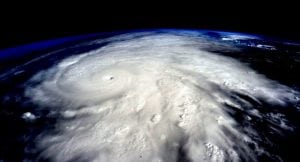 Hurricane Patricia as seen from the International Space Station on Oct. 23, 2015 (Photo by Scott Kelly/NASA)

Next, assemble a safety kit (see www.nhc.noaa.gov/prepare). Remember that the river towns of the Highlands, which suffer shoreline and inland flooding risk, are widely forested, increasing the risk that escape routes may be blocked by fallen trees or limbs. Dirt roads and elevated areas add landslide and accessibility risk.

The National Oceanic and Atmospheric Administration foresees a season of more powerful and frequent hurricanes (17). With only five having hit the U.S. so far, the worst-case scenario includes a dozen more in the next few months, with warmer water in the Atlantic increasing the odds they’ll be more forceful. Four are expected to be major. Most hurricanes are believed by National Geographic and other scientific organizations to have been super-sized by human activity. 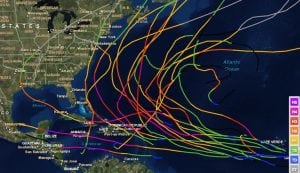 One danger of hurricanes is that they often don’t seem “real” until it’s too late. A category 1 hurricane, with sustained winds of 74 to 95 mph (enough to damage shingles, vinyl siding and gutters and topple power-line poles), can quickly become far more intense. For an animated vision of the damage that can be done to your home by the exponential power of these storms, visit the National Hurricane Center.

When severe weather strikes, the Red Cross coordinates with town, city and county officials. But the organization doesn’t “activate” or tell people where to go before a storm comes close. Depending on the type of disaster, “we don’t know if that [pre-approved] location will be standing or have power — or be close enough to the population in need,” explained Kelly Formoso, the Red Cross program manager for Dutchess County. However, Beacon does have Red Cross-approved shelters, vetted for water and fuel supply, accessibility and other safety measures at the ready, and Beacon Fire Chief Gary VanVooorhis said his department can request the use of Beacon High School. 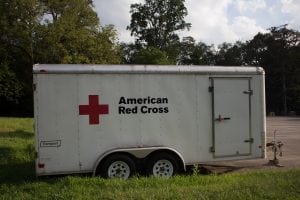 The American Red Cross trailer, filled with supplies, parked at Philipstown Rec. (Photo by A. Peltonen)

In Philipstown, the Recreation Center on Route 9D in Garrison was certified this year by the Red Cross as a shelter. Previously, the closest approved shelter was in Carmel.

To get the designation, the Town of Philipstown had to upgrade the Recreation Center, said councilmember John Van Tassel, who worked on the project. That included making the bathrooms and showers handicap accessible and adding a generator. Cots and other supplies are stored in a trailer at the site by the Red Cross, which would bring in food and water. The Recreation Center already had a commercial kitchen.

The town would rely on volunteers during an emergency, said Amber Stickle, director of Recreation and Parks, to help cook and distribute food to those at the shelter. The Red Cross instructs volunteers in supply and shelter management, and so far 10 residents have been trained. 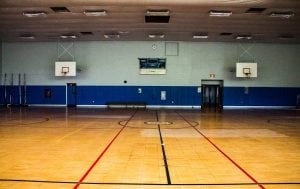 The gymnasium at the Philipstown Recreation Center, which would serve as a shelter during severe weather (photo by A. Peltonen)

Above all, says Van Tassel, unless there is an evacuation order, “the safest place to shelter is in your home.” If evacuated, be ready with personal essentials, as shelters can only provide the basics. And when emergency workers say, “Go,” go! To delay is to risk lives: yours, your neighbors’, and the emergency workers.

Van Tassel noted that the Philipstown shelter is pet-friendly. Dogs, cats and other animals would be placed in the center’s basement.