She’s certainly not, but the novelist Sarah Dunn ran with the thought and her ABC sitcom debuts Oct. 11

When Sarah Dunn moved to Garrison with her husband, Peter Stevenson, and their two children, she says she kept noticing that “all the women looked so beautiful.” A self-described size 14, the writer says she “spotted them everywhere — at preschool drop-off, at Foodtown … all these wonderful women were thin and dressed better than me.”

Five years later, a skewed version of that first impression has been transformed into an ABC comedy, American Housewife, which premieres at 8:30 p.m. on Tuesday, Oct. 11. Its original title: The Second Fattest Housewife in Garrison. 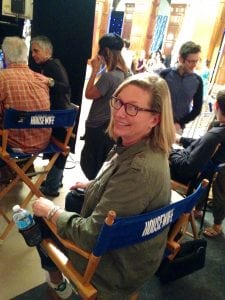 Dunn, who has long experience writing for television — her credits include Murphy Brown and Spin City — moved with her family to Garrison so she could spend more time with her children and friends and work on her third novel. A phone conversation discussing ideas for sitcoms with producer Aaron Kaplan altered that plan. When Dunn said offhandedly, “You know, I’m the second fattest housewife in Garrison,” Kaplan stopped her cold, saying “That’s the show.”

After hearing more about Dunn’s experiences in her newly adopted hamlet, he replied with a line that many people certainly have thought during their harried daily lives: “We should make a sitcom about it.”

In Dunn’s case, they have.

Although Garrison was eventually ditched for Westport, Conn., which the producers felt would be more familiar to viewers, elements remain, says Dunn. Both locales 70 minutes by train from New York City, “a distance which is just far enough for couples with young children to both commute. But you don’t want to be that far from your children — so what you have are a lot of women with big-city jobs making the very reasonable choice to stay home. There’s all this feminine energy around, and I have different ideas on how to channel it. For instance, I asked one friend who was working out a lot then, ‘Is this what you want to be doing with your life?’ ”

That Garrison friend, Doris Lee, inspired one of the sitcom’s lead characters, also named Doris. Played by the comedian Ali Wong, she “evolved away from the real Doris quite a bit,” Dunn says, “but she’s still Korean and still great.” Of the other characters in the show, Dunn will only say they may or may not resemble members of her family. She’s written so much about her husband, who is a journalist, she says that “he’s totally used to it” and “a very good sport.” 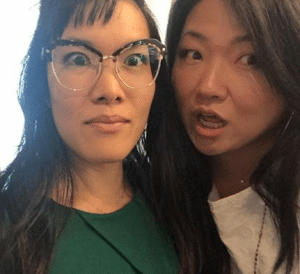 Doris Lee (right) with comedian Ali Wong, who plays a character named Doris on American Housewife inspired by Lee. The Garrison resident told The Current she is flattered by the tribute but wanted to “use this opportunity to officially deny everything in advance of the premiere.”

Stevenson remained in Garrison with their children while Dunn relocated to Los Angeles to produce the pilot and, after the show was picked up, its first 13 episodes. She doesn’t enjoy the city, she says, and was hoping the series could be filmed on the East Coast but winter weather got in the way. The show’s first-season success will determine whether Dunn and her family remain in Garrison or move west.

“I loved the old title, and it got a lot of attention and helped get the project picked up,” says Dunn. “But after we shot the pilot, it felt like a limitation. I think of American Housewife now as a family sitcom where the mother [played by Katy Mixon] is the real, central character. She’s a larger-than-life personality, and while she can be antagonistic, she also has to adapt. There are a lot of parenting stories.” 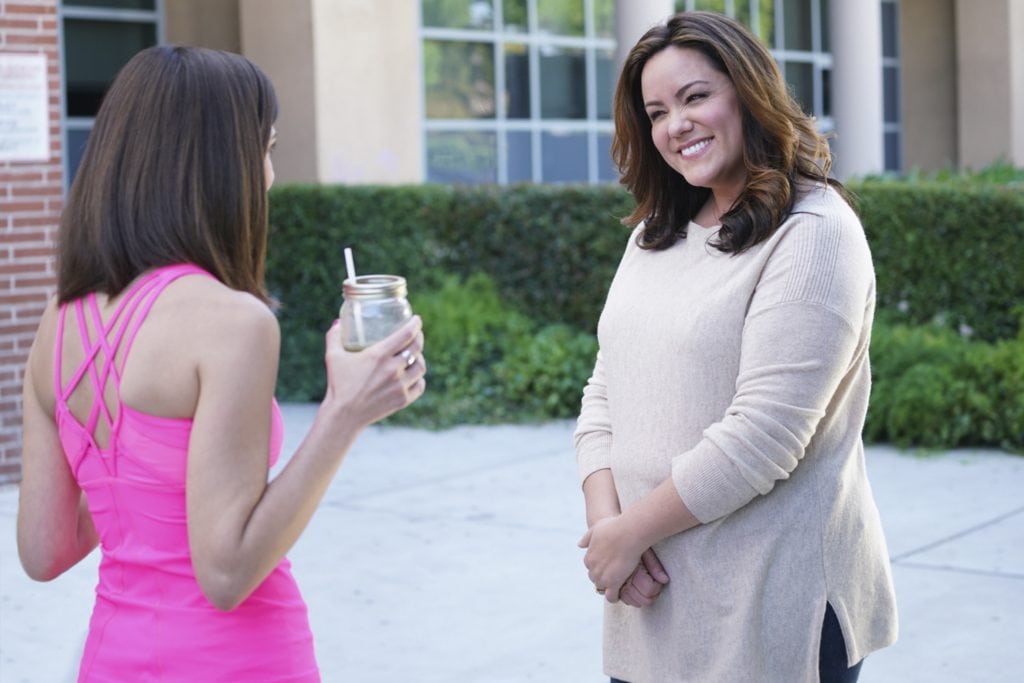 Katy Mixon, right, is shown in a scene from the American Housewife pilot. (Photo by Adam Taylor/ABC)

In the pilot, the family has just moved to Westport, and the plot focuses on the mother’s efforts to help her youngest child fit in while also steering the older two to fit in less with their affluent peers.

Mixon, best known for her role on the sitcom Mike and Molly, has described her character as “an authentic woman living in an inauthentic world, and she’s trying the best that she can to be who she is. And sometimes she’s fearless and sometimes she’s got so many insecurities…. Whatever gender you are, whatever area you come from, [or] background, everybody can relate to insecurities.”

On top of the hubbub associated with the debut of a network series (for which she also serves as an executive producer), Dunn is about to publish her latest novel, The Arrangement. The publisher’s deadline for the manuscript was days before the premiere of the show. Dunn describes the book, which will be published by Little, Brown in March, as being about “a happily married couple about to embark on an open marriage for six months.” She quickly interjects that this an instance the plot does not echo her home life.

A pre-release summary may strike a familiar chord:

“Lucy and Owen, ambitious, thoroughly-therapized New Yorkers, have taken the plunge, trading in their crazy life in a cramped apartment for Beekman, a bucolic Hudson Valley exurb. They’ve got a 200-year-old house, an autistic son obsessed with the Titanic, and 17 chickens, at last count. It’s the kind of paradise where stay-at-home moms team up to cook the school’s ‘hot lunch,’ dads grill grass-fed burgers, and, as Lucy observes, ‘chopping kale has become a certain kind of American housewife’s version of chopping wood.’ ”

When asked about her prolific writing, Dunn expresses surprise. “It looks like that now, but it didn’t feel that way,” she says. “When you’re in charge of your kids, it’s really hard to write. It’s lucky that both of these projects have come out; it’s almost as if I wrote two different versions of the story, and one was right for ABC and the other one most definitely was not.”

HOW WE REPORT
The Current is a member of The Trust Project, a consortium of news outlets that has adopted standards to allow readers to more easily assess the credibility of their journalism. Our best practices, including our verification and correction policies, can be accessed here. Have a comment? A news tip? Spot an error? Email [email protected]ent.org.