The nine-month-long debate over rezoning seven parcels within Beacon’s high-density “linkage zone” may have reached its conclusion, with the City Council voting Oct. 17 to rezone all seven.

The remaining three lots, together known as “Parcel L,” also on 9D, have been zoned for medium-density residential, but in a different class, one that permits multi-family dwellings.

All seven had been part of the linkage zone, which was adopted by the City Council in 2013 and allows for high-density residential development. The zone encourages development as a way of creating a “vibrant, economically successful, walkable and environmentally sustainable connection” between Main Street and the river.

Its boundaries encompass Beekman Street, West Main and a portion of Wolcott Avenue as it runs in front of City Hall, the Reformed Church of Beacon and Parcel L.

The present debate dates to February, when a handful of neighborhood residents petitioned the city to rezone the seven properties, arguing that high-density linkage zoning did not fit with the homes surrounding the lots. Of particular concern was Parcel L, which is owned by Beacon Ridge Associates and is the site of a proposed 70-unit development called River Highlands.

In addition, the petitioners said, linkage zoning contradicts Beacon’s historic district and landmark overlay zone, inside which all seven parcels sit. Building owners in the historic zone must seek approval from the planning board before making certain exterior alterations. 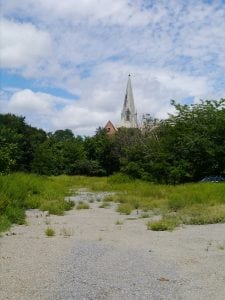 A view of Parcel L (photo by J. Simms)

All seven of the parcels were zoned medium-density residential in the 2007 Beacon comprehensive plan. In 2009, amendments to that plan were adopted which downzoned Parcel L to low-density residential. In 2013, all seven were rezoned again for high density when the council created the linkage zone.

The residents’ petition asked the city to restore the 2009 pre-linkage zoning for the seven lots.

Public feedback on Oct. 17 focused almost solely on Parcel L, which, after the Council’s vote, is now zoned for around 16 residential units. The residents’ petition requested low-density zoning on the site, which would have allowed one to two units per acre on the approximately three-acre site. The Beacon Planning Board, which has discussed the issue several times, agreed and recommended low density for Parcel L.

“Why is it that we’re still discussing this?” Garianne Carapola, a resident of the nearby Hammond Plaza complex, asked the council. “It seems quite clear what the community wants and what the planning board recommends as well,”

Carapola and other residents — along with Council member Lee Kyriacou — cited the Planning Board’s written recommendation that lower density on Parcel L would be “more consistent with the existing and proposed zoning of adjacent properties.” In addition, the Planning Board said, added density at the site might lead to traffic issues at the intersection of Rombout and Wolcott avenues while potentially obstructing scenic views of the Hudson River.

“The more important element we should be considering first is what’s on the street,” Kyriacou said. “What is the zoning of the parcels directly adjacent to [Parcel L], particularly across the street? That’s a powerful argument and I don’t see the equivalent argument in our material.”

Mayor Randy Casale said that several planning board members seemed to waver while discussing the site during their Oct. 12 meeting and, “to me, that’s not a convincing reason” to follow the board’s recommendation.

“It’s not the first time that the City Council has thought different than the Planning Board,” Casale added.

Council members George Mansfield and Peggy Ross both called the rezonings a “compromise,” while city planning consultant David Stolman said: “This is not like doing a proof in geometry where there’s only one correct answer. This is a matter of judgment. The council has to decide what’s more compelling.”

The vote to rezone the properties was 5 to 1, with Kyriacou dissenting. Another vote, to amend the comprehensive plan to allow for the rezonings, split the same way.

Hammond Plaza resident Lisa Gallina was one of the organizers of the petition, and on Oct. 19 she said the Council’s move didn’t go far enough.

“There are so many developments in play in this neighborhood,” she said, referring to Parcel L, The View on Beekman Street, a just-announced affordable housing complex adjacent to City Hall and the potential for additional waterfront development. “It’s very shortsighted with so much growth happening so fast. It’s too much; it’s going to be negative not just for the people who live in this neighborhood but for Beacon overall.”