A forum on the county budget will be held at 11 a.m. on Thursday, Nov. 17, at the Towne Crier Café, 379 Main St., in Beacon. Molinaro will be there to answer questions.

For the third year in a row, Molinaro’s budget plan reduces the amount of taxes collected. In this case, the 2017 tax levy of $105.5 million would be about $170,000 less than this year’s. His budget proposal also lowers the property tax rate to $3.58 per $1,000 of assessed value from $3.60. No county services or programs are being cut, according to Molinaro’s figures.

In Beacon, similar tax breaks are being proposed for 2017. The administration’s budget, introduced to the City Council in October, includes a 2.43 percent property tax decrease on homes and a 0.43 percent decrease on commercial properties. The tax levy would increase by $130,989 to $10.3 million. 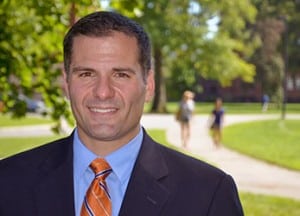 Molinaro believes a stable or lowered tax rate will help attract businesses to the area, said Colleen Pillus, a spokesperson for the Dutchess County government.

Also of significance in the proposed Dutchess County budget is the continued funding of the Municipal Consolidation and Shared Services program, which was established in 2013. The city of Beacon has been one of the county’s most aggressive applicants, receiving more than $856,000 for consolidation studies and initiatives related to its fire stations, police department efficiencies and sewer projects.

“We are seeing some moderate economic growth now [in Dutchess County], but the city of Beacon is certainly seeing a vibrancy that’s stronger” than the county as a whole, Pillus said. “Mayor Casale was one of those people — when things were downturned, he saw that as a time to restructure and cut costs.”

The 2017 county budget plan includes $1.3 million for tourism and the arts, a $225,000 increase over last year, including a 10 percent increase in arts funding. Tourists, many of them visiting southern Dutchess, spend more than $530 million annually in the county.

The budget proposal is available online at dutchessny.gov. It has been submitted to the Dutchess County Legislature, which will continue its review of the numbers through Nov. 16 and has scheduled a vote for Wednesday, Nov. 30 on a tentative budget and Dec. 8 for the final budget following a public hearing Dec. 5.