Hearing on 10-year strategy for growth set for January

Six months after the project began, an updated, pedestrian- and environmentally friendly Beacon comprehensive plan is nearing completion. The next step, following a well-attended workshop (the second of two) in November, is for the City Council to hear public comments on the draft at its Jan. 17 meeting.

The Council could adopt the plan shortly thereafter, depending on feedback, said Council member Peggy Ross, who is co-chair of the update committee.

BFJ Planning, the Manhattan-based firm hired to oversee the revision, provided an overview at the Nov. 17 workshop, focusing mostly on newly written chapters devoted to the waterfront/Metro-North train station area and land use.

BFJ’s full 12-chapter draft will be available on the city’s website by mid-December. A slideshow with highlights is already there.

The updated plan, which will guide growth and development in Beacon over the next decade, reflects community feedback that showed a desire for maintaining open space near the waterfront while allowing enough development to guide people from the train station to the Main Street retail district, said Noah Levine, a BFJ planner.

“We were trying to do something that was a little more moderate compared to what had been proposed by the MTA [Metropolitan Transit Authority] and others in the past,” Levine said, adding that the plan will include specific changes to better connect the city with the waterfront. 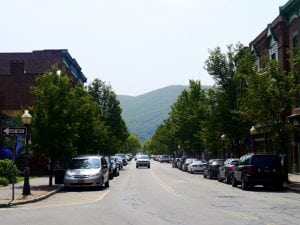 Ideas discussed at the Nov. 17 session included small-scale, ground-floor retail on the east side of the train station and the possibility of added retail development along West Main Street. Such additions would encourage pedestrians to head toward Main Street, according to BFJ.

The plan also makes note of previous proposals for the waterfront by the MTA as well as Scenic Hudson, which had planned a hotel and conference center at Long Dock Park. Those proposals, made a decade ago, were ultimately abandoned due to concerns about traffic and parking, as well as sea-level rise and flooding.

In its draft of the updated plan, BFJ acknowledges those decisions and proposes that land west of the train station should remain almost exclusively as open space that would be fed by improved connections between Riverfront Park, Long Dock and the proposed Hudson Fjord Trail.

On the east side of the tracks, the plan allows for some development — possibly residential or offices — complemented by the additional limited retail. Based on comments from residents concerned with the speed of Beacon’s growth, Levine said the updated plan’s guidelines for the waterfront will include public plazas or open spaces meant to buffer development and preserve views of the Hudson. BFJ says a handful of recommended zoning changes would cut the development potential of the waterfront in half while better preserving viewsheds and anticipating flooding.

Along Main Street, the draft calls for a series of “pocket parks” to be carved from municipal land, creating “nodes of activity” that could be stops for a rubber-wheeled trolley that would, again, provide a connection to the waterfront from Main.

The updated comprehensive plan also includes chapters on residential and commercial development, environmental resources, transportation and recreation and historic resources. Those chapters were part of the city’s 2007 plan and are being updated with revised demographics and other information.

The slideshow on the city’s website includes pages from the 2007 plan and the proposed revision highlighting the changes. The plan does not get into specifics such as how much growth Beacon can sustain overall but instead offers broad recommendations for how the city can grow while promoting Main Street retailers and preserving natural resources.

“We’ve gotten a lot of feedback from residents,” Levine said. “There’s a very diverse community in Beacon and people seem to be very engaged. The response has been great so far.”