Chef Terrance Brennan brings his eye for detail to the Roundhouse

Terrance Brennan sweats the details, even when they’re details that no one else may ever notice.

That became clear moments before he sat down for an interview in the lounge area of Beacon’s Roundhouse, where two months ago he took over as head chef to overhaul the hotel’s restaurant and menu.

To an untrained eye, the table looked fine. But sure enough, with a quick nudge, the layout of the room snapped into focus. Only then did he sit down.

“The culture here is excellence,” he explained. “And you attract what you produce.” 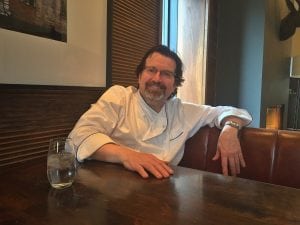 Chef Terrance Brennan at the Roundhouse (Photo by B. Cronin)

Brennan’s game of inches reflects the razor-thin margin that separates success from failure in the restaurant business. But it was a love of chaos, not order, that got him interested in cooking as a teenager in the suburbs of Washington D.C. He enjoyed the convivial atmosphere that came from working with his father at the family’s pizza and sandwich shop, and then he got hooked on the madcap adrenaline rush of cranking out hundreds of dishes a night in cavernous hotel kitchens.

Like a highly touted pitcher who reaches the big leagues and realizes he needs more than a fastball, Brennan soon understood that if he wanted to build a career as a chef, he needed finesse. And for that, he had to move to New York.

After writing every Manhattan restaurant he could find an address for, he landed a job at Le Cirque, taking orders in French, which he did not speak. The understaffed brigade struggled with the volume of orders, but it was there he says he learned the procedures and processes that keep the finest kitchens humming. After a three-year cooking tour of Europe, he says he felt ready to put a uniquely American spin on European fine dining. 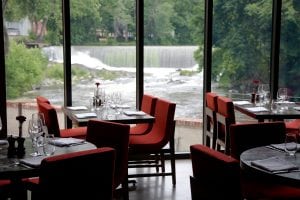 The dining room at the Roundhouse restaurant (Photo by Teresa Horgan)

Brennan’s two Manhattan restaurants, Picholine and Artisanal, brought him critical acclaim. But he says the rising rents soon became too much and, like many New Yorkers, he left the city for the Highlands.

He says his challenge at the Roundhouse is to figure out how to adapt the standards of classic fine dining to the budgets and tastes of customers who are shying away from the pomp and circumstance of haute cuisine.

He figured his way forward would be through the fields, specifically, vegetables. He was known at Picholine for his vegetarian tasting menu and so was enticed by “all these great farms as well as the trend of proteins taking on more of a supporting role.” He spent a summer visiting farmers around the Hudson Valley, asking about crop rotation and soil inputs and looking for produce that told the story of the farm it came from. He also got in touch with a forager in order to secure wild greens and mushrooms.

At the same time, Brennan knew he had to serve meat. He decided to go with one of the most sustainable ways, known as “whole animal,” when a restaurant buys one butchered pig or steer at a time and finds a way to cook its way through it.

That approach presented its own challenges. “I had to figure out what to do with a whole pig,” Brennan says. “I can’t just have every entree be a different pork dish.”

While Brennan’s menus at the Roundhouse reflect the forests and fields of the Highlands, with greens from Obercreek Farm alongside black walnuts foraged from Mount Beacon, there’s also a “Nose to Tail” section for the adventurous diner who’s ready to tuck into ears, trotters and tongues, as well as a nose-to-tail tasting menu that ends with a sweet riff on chicharrónes, topped with chocolate and candied bacon dust.

“My concern was that people would think that this was too out there,” he says. “I mean, the first item on that tasting menu is beef heart tartare. It’s pretty in -your-face. But the response has been really positive. We’re having fun.”

Next comes the business of getting through the winter with a menu that relies on seasonal items. “Next winter I’ll be better prepared,” he said. “I’ll have preserves, pickled and fermented things, because I’ll be putting those up throughout the summer. This year I got in the game too late. I’ll miss the foraged things, but there’s enough greenhouses around here for us to work with. And I’m not going to cheat. You won’t see any tomatoes this winter.”

Meanwhile, there’s still tinkering to be done and problems to be solved. Like what to do with all the pork broth produced by all that nose-to-tail cooking. And how to create a more affordable menu for Monday and Tuesday nights to appeal to the locals after the tourists have left. Brennan hopes to use those two problems to solve each other.

“I’ve got all this amazing pork broth and I’ve got a bar,” he said. “Why not do ramen? That’s what we’re playing with now. Ramen night, five different ramens, charge 12 bucks, pack the whole town in here.”