Thomas Costello is running unopposed in the March 21 election for his fourth term as the Village of Cold Spring justice. A 1976 graduate of Fordham Law School, Costello was first elected in 2001. His responses have been edited for brevity. He said he could not discuss the specifics of any cases.

Why is almost every traffic ticket pleaded down?
If every case went to trial, the courts wouldn’t be able to function. Pleas are up to the prosecutor but because there is no village prosecutor, that authority is delegated to the police department. It’s up to me whether to accept a plea, and there are times they don’t offer one. 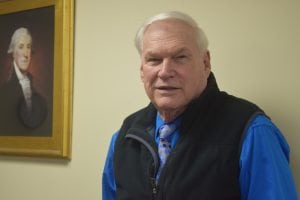 Does the village lose revenue by pleading down so many tickets?

The only revenue the village gets to keep is from parking tickets. For other tickets, they only get part of it. The state receives the major benefit.

Is there a trend in the number of DWI cases?

We have few DWIs. State police or the sheriff make most of those arrests.

Have traffic offenses changed over the years? Are cell-phone violations more common?

We have few cell-phone violations. Most tickets are for speeding and “failure to obey a traffic-control device.”

What serious offenses do you deal with in criminal court?

The biggest is “aggravated unlicensed operation of a motor vehicle” — people driving with multiple suspensions. I see few cases for sale or possession of heroin or cocaine, but I believe they’ve had a number of cases in the Philipstown court. Here it has mainly been occasional arrests for unlawful possession of marijuana.

How has the Wednesday criminal court changed during your time as judge?

We’re dealing with fewer and fewer cases. It’s part of a general decline in the crime rate. The county jail population and number of people on probation are way down.

Cameras and recording devices are not allowed in court. Is that your rule?

That’s a state rule. In higher courts there is a stenographer; here we now record the audio. You need permission from the administrative judge to take photos.

Do you think TV programs such as Judge Judy have any educational value?

I’m not saying that you can’t glean certain basic principles from them, but that’s not the way a real court works.

Do you think it’s more difficult to abide by a restraining order in a small town?
My orders generally consider that. I’ll include a minimum distance people have to stay away. People ask “What if I see the person in Foodtown?” I tell them to turn around and come back another time.

Is there a common cause for cases involving aggressive or violent behavior?
Sometimes it’s just people having a bad day. Sometimes it’s a family dispute that ends up with someone striking someone. Usually it’s in the heat of the moment, and they may have regrets immediately thereafter.

What do you think of the idea of merging the Philipstown, Nelsonville and Cold Spring courts?
I’m not going to comment on the local courts. In town and village courts statewide you’ll see some consolidation, creating districts that comprise a number of jurisdictions.

Minors sometimes appear in your court. Is that increasing?
If we have a whole pile of bad kids, I don’t see them. For most kids it’s been due to youthful exuberance, just part of being young.

Is Putnam County Legal Aid adequate?
It’s undergoing change in terms of expansion and its budgets; they’re going to have to provide representation at arraignments. There is more of a burden being placed on the defense lawyers.

Does the old saying “a defendant who represents himself has a fool for a client” apply to Justice Court?
Sometimes people don’t see things as they are and are not able to be objective. They’re too close to the case. And most people don’t have the legal knowledge. Do you need a lawyer for a traffic ticket? You’re entitled to one but most people verbalize their case quite well. Most people are courteous. A few could learn some manners.

Is jail a sentencing option at the Justice Court level?
I can sentence someone to up to a year on a misdemeanor. I don’t do felonies except to arraign them. Once the district attorney indicts a person the case is transferred to county court.

How effective is jail time in changing a person’s behavior?
You’re generally dealing with two types of people. For one, jail is a wake-up call. The other knows the system, and it’s business as usual.