Madison Chiera, representing the Loretto Council No. 536 in the Knights of Columbus State Free Throw Finals in the 12-year-old girls’ bracket, finished third in the state competition on April 2 at West Point.

Madison lost by two shots after winning the local, district, regional and downstate contests. She is first girl since 2002 to represent Loretto at the state level. 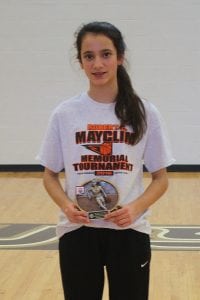