A teacher retires, and a painter returns

Ursula Schneider, whose work is being shown at the Buster Levi Gallery in Cold Spring through April 30, came to the U.S. from her native Switzerland in 1968 to attend the San Francisco Art Institute and “see whether I could become an artist,” she recalls. Nearly 50 years later, there is no doubt about that.

After retiring from teaching in 2014 after 27 years on the faculty at Sarah Lawrence College, Schneider “felt at a loss for awhile.” But her studio work altered that course. “I’m back in the groove. Having a show puts you on the spot.” 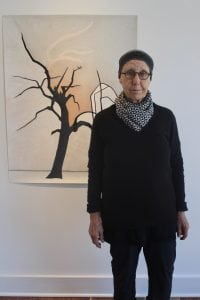 Ursula Schneider (Photo by A. Rooney)

She notes that her first degree was in ceramics, not painting. “My mother had a ceramics business, and I worked with her,” she recalls. “I switched because there were more possibilities. I tried painting and sculpture and wound up doing more painting. Then I added woodblock printing. I found printing to be related to ceramics, as each is a distinct process.”

During her early days in San Francisco, she would go outside with a flashlight during full moons to draw. Working in the dark, “you don’t get caught up in the detail,” she says. “You get the gestalt of it because you have to relate to it in almost an emotional way. That was a pivotal experience.” 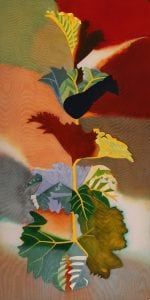 Schneider’s focus on formations in landscape led her to Iceland, where she became fascinated by the “landscape devoid of human alteration: the movement in the earth, the forming and the erosion, the weather, the water, and the vegetation,” she says.

During visits to the Arctic National Wildlife Refuge in Alaska, Schneider completed a series of pastel drawings and paintings. Later travels included Australia’s Northern Territory. Relocating to New York in 1980, Schneider made her way to Tomkins Cove, on the west bank of the Hudson, in Rockland County. 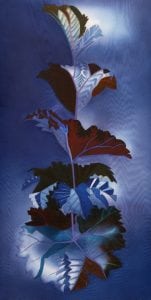 Schneider begins her paintings by drawing on site. She selects an elevated spot so that she has a wide view of a river or mountain range, then waits until something is revealed. After her move to Tompkins Cove, it took Schneider “three years to see what was there,” she says.

“Usually I make a whole bunch of drawings, then digitize them, and print them,” she explains. “I use neo-colors, which are like a wax crayon; you can take the brush and make it wet and it becomes a watercolor. I make about 12 drawings exploring ideas and options.”

Aster and Asteroids, by Ursula Schneider

At Buster Levi, a trio of paintings feature the gunnera plant, which Schneider came upon at Stonecrop Gardens in Cold Spring. Each panel, done from the same drawing, seems radically different in color and temperament. “I was very inspired by the architecture of the plant, and by what the plant can do,” she says. “There’s a big leaf on the bottom, which is ready to die, while there’s a small one at the top, ready to open — a life cycle. The architecture of veins and folds make it sculpturally solid, but it’s just a leaf.”

A large work, Aster and Asteroids, dominates the gallery space. Based on a vantage point along the Hudson, looking east, the painting is a mixture of observed objects and the fantastical. Another grouping of paintings depicts old apple trees. “I saw them in Switzerland and photographed them, distilling each one’s angst or grace,” she explains. “They’re survivors.”