A serendipitous discovery in Garrison is conjuring up memories of Riverkeeper’s earliest days and the role played by a nearly forgotten and now abandoned boat.

On March 24, John Cronin spoke to middle-school students at the Garrison School about his decades-long career in environmental conservation, including his appointment in 1984 as the first full-time patrol captain for Riverkeeper, then known as the Hudson River Fishermen’s Association. The nonprofit, founded in 1966, has spawned more than 300 similar watchdog groups on waterways around the world.

Two weeks after Cronin’s talk, PTA President Nell Timmer and her family were hiking through Castle Rock Unique Area, located across Route 9D from the Philipstown Recreation Center. There, partially hidden by the undergrowth, they spotted a boat. On its stern were the words Hudson River Fishermen’s Association and in bold lettering on its side, Riverkeeper. 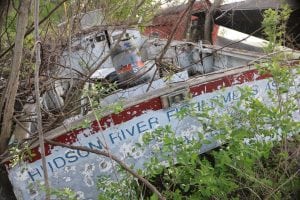 The original Riverkeeper patrol boat, now in the woods in Garrison (Photo by M. Turton)

“I knew right away it was John’s original boat,” Timmer said.  The timing of the discovery was not lost on her. “I thought the coincidence was too wild! I was shocked.” She said she had hiked Castle Rock many times but never noticed it. “I saw it with new eyes” after Cronin’s talk, she said.

The boat was not at Castle Rock by happenstance. Although now located in Ossining, Riverkeeper was based in Castle Rock when Cronin was patrolling the Hudson. 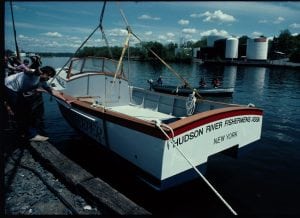 The launch of the first Riverkeeper patrol boat in Kingston on May 14, 1983. (photo provided)

Timmer contacted Cronin, and the two returned to Castle Rock to take a closer look at the historic vessel, discussing whether it could be restored. But Riverkeeper spokesperson Leah Rae said the organization has concluded that the boat, which was taken out of the water about 20 years ago, is beyond repair and has been since at least 2000, when John Lipscomb joined Riverkeeper as its patrol captain.

Rae said Riverkeeper is focused on replanking and maintaining the 36-foot R. Ian Fletcher, which took over river patrols in 1990. A second 20-foot boat was added in 2016 to expand the organization’s water quality-monitoring program. 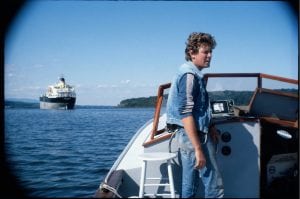 John Cronin, the first Riverkeeper captain, on the Hudson River in 1984 (Photo by Don Nice)

The original boat was launched on May 14, 1983, at the Hudson River Maritime Museum in Kingston. Rae noted the important role it played in a 1984 investigation by Cronin that found Exxon was discharging polluted salt-water ballast from its tankers into the Hudson River, then refilling the tanks with fresh water to be sold as drinking water in Aruba.

The evidence was so clear “that Exxon had little choice but to settle,” Rae wrote in an email, paying $1.5 million to establish the Hudson River Improvement Fund and $500,000 to the Hudson River Fishermen’s Association.