It’s been three years since David Rees and Sam Anderson performed their auction-themed comedy in Beacon, but the duo returns Saturday, May 20, for a benefit performance.

A few things have changed about the offbeat act, which focuses on the granular details of Beacon personalities and businesses: One of them no longer lives in Beacon. In an effort to remain on the cutting edge of relocation trends, Rees moved last year from Beacon to Brooklyn.

“Did you pioneer that path?” Anderson asked. “The reverse move? You’re supposed to have kids in the city first and then move to Beacon to buy a house.”

“I sold the kids in the city to have enough money to buy a house in Beacon,” replied Rees.

Their original shows took place at Hudson Valley Auctioneers on Main Street and the pair claimed that as part of their rental agreement they were required to auction at least one item during each performance. The May 20 show takes place at the LNJ Tech Services Building at 4 Hanna Lane as a benefit for Planned Parenthood, the United Nations Refugee Agency and the NAACP. They will keep the auction theme but ramp it up for the cause. 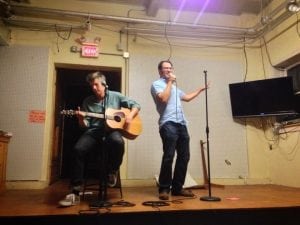 “David’s comedy is weirdly suited to being an auctioneer,” Anderson said. “He whips everyone into a frenzy and generates huge amounts of money for even the ridiculous prizes.”

When the two men began working together in Beacon in 2010, neither of them were known as performers. But they shared a love of exploring minutiae in search of the ecstatic. Anderson is the critic-at-large for The New York Times Magazine, where he writes a weekly column called “New Sentences” that teases out the deeper meaning of sentences that catch his eye, whether they are poetic (“You’re so quiet you’re almost tomorrow,” by Ocean Vuong) or plain (“Switch-hitting is a decision you have to make over and over again,” by Chipper Jones).

Rees just completed the second season of his TV show, Going Deep with David Rees, which appeared first on the National Geographic Network and most recently on The Esquire Channel. The show, which Rees describes as “teaching you how to do the things you already think you know how to do,” had Rees traveling around the country (and frequently filming in Beacon) to interview experts on the best way to tie shoelaces, shake hands, dig a hole, light a match, swat a fly or climb a tree.

“I always loved going to a dinner party and sitting next to someone who knows a lot about something I’ve never thought about and then badgering them with questions,” said Rees. 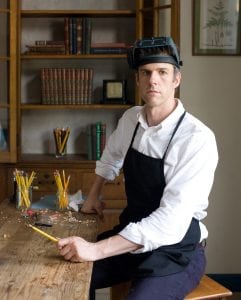 he show sprang out of his well-received stint as an artisanal pencil sharpener. Shortly after he moved to Beacon in 2009, Rees retired his popular political strip about the Iraq war and the Bush Administration called Get Your War On. The comic ran in, among other places, Rolling Stone, and earned him more than $100,000 in syndication fees, which he said he donated to a group that removes landmines in Afghanistan.

Newly divorced and broke, Rees took a job in 2010 at the Poughkeepsie office of the U.S. Census Bureau and became enamored with his government-issued pencils. He taught himself how to sharpen them using a variety of hand tools, which then led to his artisanal sharpening business.

On one hand, the business was a gag, poking fun at the wave of artisanal and bespoke businesses. On the other, Rees did painstakingly teach himself to sharpen pencils by hand, and the results can only be described as beautiful. Rees’ ridiculous premise was oddly poignant.

In 2013 Rees wrote a book, How to Sharpen Pencils, which manages to be a straightforward manual of how to sharpen pencils, a moving record of a painful and transitional time for the author and a celebration of the satisfaction of hand crafting. The book also instructs readers how to break into someone’s house in order to destroy their electric pencil sharpeners. It received rave reviews. 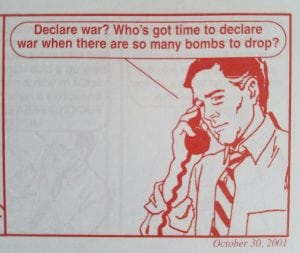 A panel from Getting Your War On

“David has these gigantic reservoirs of both joyful enthusiasm and excoriating anger,” explained Anderson. “Going Deep embodies the first, and Get Your War On embodies the second. What’s fun about the comedy shows, is tapping into those reservoirs and watching them geyser all over the place.”

“I’m working on a bit right now about Jeff Sessions’ face,” said Rees. “It will be very illuminating.”

Tickets for the show and auction, which begins at 8 p.m., are $50 at Eventbrite. A dance party begins at 10 p.m. Parking is limited, so audience members are advised to bike or walk.

Rees has another request.

“I’m excited to come back to Beacon, so do you think we could get Randy there?” he asked, referring to Mayor Casale. “I just think it would be nice if Randy was there and I got the key to the city.”