Taylor Timke was driving from her job as a pharmacy technician at Drug World of Cold Spring to her sister’s home in Poughkeepsie on May 31 when she experienced her first tornado. She’s hoping it will be her last.

“It was eerie,” she recalled. “The clouds were so low, and the wind kept getting bigger, and then the thunder and lightning began. Once the downpour began, I saw a tree go down near a fire station just off Route 52 [in Wappingers Falls], and the thunder became incredibly loud.” 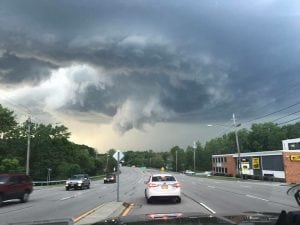 A photo of the storm taken by Dutchess County first responder Ryan Michaels in Wappinger Falls at 8:23 p.m. on May 31.

The Wappinger tornado, which touched down at 7:14 p.m., had winds that reached 100 mph, leaving at least 2,500 Central Hudson customers without power.

Intense thunderstorms have one feature that makes them more dangerous than milder storms: Their upwardly rotating whirlwinds can easily turn into tornado forges.

There was hail the size of golf balls reported in Poughkeepsie from the same storm, but in Wappinger, according to the National Weather Service, conditions produced a brief tornado that rated a “1” on the 0 to 5 Enhanced Fujita Scale, which indicates it had estimated wind speeds of 86 to 110 mph.

Tornadoes of this force cause “moderate” damage, which means roofs severely stripped but intact, mobile homes overturned or badly damaged and exterior doors and windows broken. Before the Wappinger storm hit, the last tornado to touch down in Dutchess County, in June 2006, was also an F1. (The most recent tornado in Putnam County was an F0 in 1990, but in 1989 an F2 caused five injuries.)

This year has seen record-breaking numbers of northerly tornadoes in the U.S. A sluggish jet stream causes it to plunge in the West, rather than the East, which meteorologists say allows warm, somewhat humid air to race from the South to the Midwest and up the Eastern Seaboard. As a result, unusually severe thunderstorms — which presage tornadoes — have been reported in northern locales such as central Minnesota and upstate New York.

When the air inside a thunderstorm is shoved from a sideways to a vertical tilt, it forms the funnel associated with tornadoes. It can happen quickly, and tornadoes are hard to predict because they tend to exist for only a few miles, if that. The Wappinger tornado, which was estimated to be a quarter-mile wide with a path of about 1.25 miles, was not confirmed by the National Weather Service until two days after it touched down.

Although tornados can strike anywhere (the only place one has never been recorded is Antarctica), most form in open spaces. The Highlands is protected somewhat by its forests. But the increasing number of severe electrical storms increase the odds. New York state has already had 310 severe storms this year, with thunderstorms forecast for the weekend and early next week. 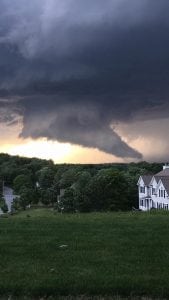 A photo taken by Breanna Winter about 7:30 p.m. on May 31 from Hillside Lake Road in Wappingers Falls

Paul Caiano, a forecaster in Albany for the National Public Radio affiliate WAMC, notes that the risk of a tornado increases with the frequency of thunderstorms and their moisture levels; higher moisture levels more easily transform them into funnels.

“The topography of the Catskill, Hudson Valley and Taconic regions could contribute to the likelihood of some storms producing tornadoes,” he says. “Appropriate wind shear is a necessary variable for storms to rotate. With the north-south orientation of the Hudson Valley, low-level winds [from the southwest] sometimes get ‘funneled’ up the Hudson Valley from due south. This localized added southerly component, as opposed to the more regional southwesterly wind, sometimes provides the necessary directional shear to allow a storm to rotate, possibly enough to produce a tornado.”

The Deadliest Wind Was Not a Tornado

On Nov. 16, 1989, nine students at East Coldenham Elementary School in Newburgh were killed by falling concrete when a 25-foot-high cafeteria wall was destroyed by 90 mph to 100 mph winds. Scientists initially thought it was an F1 tornado, but then concluded it was instead a thunderstorm “microburst,” or downdraft. The wall was built in 1959, a year before the state began requiring public school walls to be able to withstand 120 mph winds.