The teen players at the Philipstown Depot Theatre will present the musical On the Town starting Thursday, July 27, and running through the weekend. The theater is located on Garrison’s Landing. 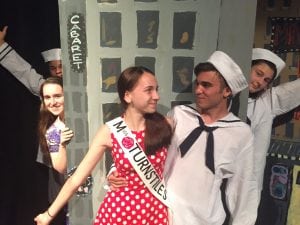 Cast members of On the Town, which will be performed starting July 27 at the Philipstown Depot Theatre; from left, Zeph Barrios, Harper Levy, Sasha Levy, Jeremy Roffman and Michael Perricone (Photo by Amy Dul)

The musical was directed and choreographed by Katie Bissinger with vocal instructor Linda Speziale and pianist Paul Heckert. The sets are by Tania Dirks and lighting by Hudson Heckert. Tickets are $12 at philipstowndepottheatre.org.