Joseph’s Fine Jewelry in Cold Spring was burglarized in the early morning hours of Monday, Aug 8. To gain access, the intruders used a rotary saw to cut a square out of the lower half of the glass front door that was large enough to squeeze through, said Joseph Immorlica, who owns the store with his wife, Bridget.

“They were only inside for three, maybe four minutes,” he said, adding that an alarm was activated at 3:01 a.m. when the thieves entered the shop at 169 Main St. 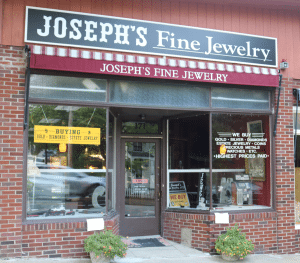 By the time Joseph’s opened on Thursday morning, its front-door window had been replaced. (Photo by M. Turton)

Footage from the store’s security cameras show two burglars wearing masks, gloves and hoodies. They grabbed silver serving pieces from the front-window displays and an interior shelving unit, although Immorlica said he has not yet calculated the value of the loss. It was the first time the store had been robbed, he said.

Immorlica said a Cold Spring police officer responded so quickly he nearly caught the perpetrators in the act. The department and the Putnam County Sheriff’s Department are investigating, including a review of footage from security cameras at businesses along Main Street. The Putnam County News & Recorder reported its security camera recorded the burglars walking down Main Street, headed west, carrying a laundry basket filled with the stolen goods.