Fish count at Little Stony Point one of 18 along river

The children came from the area. The fish came from the river, along with a crab. The naturalist came from Wappinger Falls. And they all came together on Saturday, Aug. 5, at Little Stony Point for the Sixth Annual Great Hudson River Fish Count organized by the state Department of Environmental Conservation.

Before the event, those waiting on the beach included Jake and Enrica Haelen, who moved to Garrison from Brooklyn four months ago. They brought their two young children, Rafael and Agatha, and eight nieces and nephews, all under the age of 12, and all hoping “to see if we can catch fish and count some fish,” Jake Haelen said. 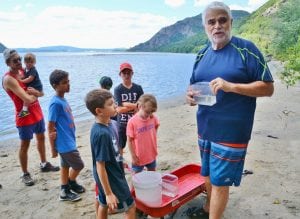 A few minutes later, they got their chance when estuary naturalist Tom Lake and his wife, Phyllis Lake, serving as his assistant, trolled a 55-foot seine through the water, scooping up whatever swam and scuttled there.

The result: young American shad, alewives and striped bass; white perch and spottail shiners — a total of 99 fish, plus a small blue crab.

After trolling, Lake guided the net ashore and carefully moved the fish into containers of water. He and Phyllis then identified and measured each one before returning the catch to the Hudson. 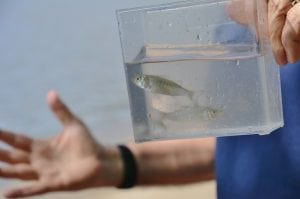 In nearly every step of the process, Lake invited the children, who were among about 30 spectators, to assist. “Glad you guys showed up to help,” he said. “Otherwise I would’ve been here all day.”

Before the young naturalists stepped forward, Lake provided a few simple — and for the fish, essential — instructions. “Make sure your hands are wet” before handling the fish, he directed. Contact with human skin removes the “slime” that coats fish and protects them from disease; “slimeless” fish often die. “You don’t that on your conscience,” he said.

What’s in the Water 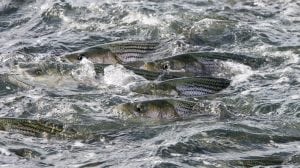 The Hudson estuary and its watershed are home to more than 225 fish species; to date, 58 have been recorded during the Great Hudson River Fish Count. The most common are striped bass and white perch, caught in both fresh and salt water. In fresh water, spottail shiners are the most frequent catch and in salty water, it’s the Atlantic silverside.

The crab’s appearance prompted a brief lesson in its anatomy – “walking legs here, two swimming paddles,” claws. “We have millions of crabs, blue crabs,” in the river, Lake said. Many other animals, including seals, like to hang out there, too.

Fish have played an important role in the river’s history, he continued. In the 1960s, striped bass and the importance of sport fishing prevented construction of a power plant at the base of Storm King, across the river from Little Stony Point. “That mountain was saved because of fish,” he said. 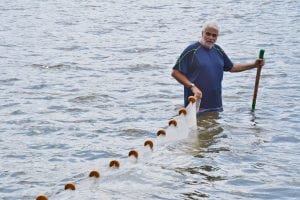 Tom Lake gets his feet wet while setting a 55-foot seine in the Hudson River at Little Stony Point. (Photo by L.S. Armstrong)

Nearly 200 years earlier, he said, shad from the Hudson fed George Washington’s army and supporters in the Revolution. So fish also helped win American independence, he said, “not on the battlefield, but on the kitchen table.”

Little Stony Point, part of Hudson Highlands State Park, was one of 18 fish count sites on the Hudson, from the Mohawk River to Staten Island. The total in 2017 was 1,289 fish, from 47 species, at 16 sites (two had not yet reported by Aug. 11), including Cold Spring and Long Dock Park in Beacon, according to the DEC.