Results won’t change who’s on ballot, only where

Beacon residents who are registered Democrats will vote in two primaries on Tuesday, Sept. 12, although the results will not keep anyone running for the Beacon City Council off the November ballot.

In the race for two at-large council seats, voters will choose between three Democratic candidates — Lee Kyriacou, George Mansfield and Ali Muhammad — to determine which two will appear on the Democratic line in the Nov. 7 election. But all three have also filed petitions to appear on other lines, either as independents or representing other parties. 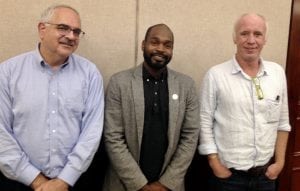 In the 16th district of the Dutchess County Legislature, which includes parts of Beacon, Ved Shravah and Frits Zernike are vying for the Democratic candidacy.

Zernike is a Beacon resident who served on Transit Oriented Development committees under Mayors Steve Gold and Randy Casale. Regardless of the outcome, he will appear on the November ballot on the Women’s Equality and Working Families party lines. Shravah, a Fishkill resident and the former president of the Wappingers Board of Education, filed only as a Democrat.

(Placing a candidate on multiple lines on the ballot, representing various parties or as an independent, is known as “fusion voting.” The belief is that this will translate into more votes, because while one may never vote for a Democrat or Republican, who can be against women’s equality or working families? Some have called for a law that would require candidates to choose one party, to reduce confusion at the ballot box.)

Paul Yeaple, the Green Party candidate for the Ward 1 council seat in Beacon, will also be on the primary ballot, but he is uncontested for his party’s line. Other than the Democrats and Green Party, no other party has a primary in Beacon.

Where Do I Vote?

Kyriacou and Mansfield are the incumbent at-large council members, while Muhammad represents Ward 4 but is leaving that seat to run for an at-large position. Kyriacou and Mansfield both filed petitions for the Working Families and Beacon United parties, and Muhammad filed as an independent candidate, so all three will appear on the November ballot to face Republican newcomer Amando Downer.

Pam Wetherbee, a current council member and chair of the Democratic Committee, also filed initial objections to independent petitions filed by Ward 3 candidate Andrew Gauzza III for himself, Landisi and Downer, claiming they did not include enough signatures.

However, none of the objectors followed up with specifics for the Dutchess County Board of Elections to review.

The three City Council at-large candidates were asked to identify the city’s most pressing issue.

Kyriacou, an eight-term council veteran, says that “Beacon’s popularity puts us in the driver’s seat for controlling development — if we’re willing to do the homework.

“The huge range of quality among the first major development projects makes it clear that Beacon needs not just a development moratorium, but more importantly specific changes in the details and execution of our zoning,” he said. “To jump-start the community discussion, I have made an extensive, detailed set of proposals — to limit Main Street maximum height/size, to encourage job creation, to expand historic protections and Greenway trails, and to support our planning/zoning boards to insist on what we want. The council has already begun deliberating on these proposals even before a moratorium is in place.”

Mansfield, a four-term council member and former Planning Board member, agreed that Beacon is “in an enviable position as a community,” and that although the city has become a destination for people moving to the Highlands, “we are witnessing an acceleration of development which threatens the very character of our community that so many of us have fought for in the past.”

He, too, suggested re-examining zoning language, building codes and the city’s development approval processes: “Our planning should not simply stay in step with accelerated development but must chart a clear and sustainable path forward.”

Muhammad, who is serving his second term as the Ward 4 representative, is a community organizer who also serves on the board of the Community Action Partnership for Dutchess County. He calls development in Beacon “only the tip of the iceberg,” instead pointing to “a lack of community development” as “the biggest issue facing our neighborhoods.”

For Beacon to succeed, he said, “a focus on job creation, education, health and safety, business improvement, and our recreational infrastructure is needed now more than ever. With public participation and municipal support we can become the village that helps to raise the child and supports one another.”