Alan Brownstein, 72, is vice president of public policy for the Hepatitis B Foundation (hepb.org). He and his wife, Patty, moved to Cold Spring in 2015.

This sounds odd, but how did you get into Hep B?

For many years I was the CEO and president of a number of national health organizations, including the American Liver Foundation. I worked with scientists and doctors to develop “business plans” for developing treatments. I retired in 2013, but last year the Hepatitis B Foundation asked me to head up a national campaign for a cure.

Why should people be concerned about the virus?

Among those infected, it becomes chronic in as many as 5 percent of adults, 90 percent of newborns and 50 percent of children by age 6, which can lead to cirrhosis and liver cancer. That’s about 250 million people worldwide, and it leads to 800,000 deaths annually. It’s also expensive. By one estimate the medical costs associated with Hep B, such as liver transplants, in the U.S. top $4 billion annually. Globally, the virus most commonly travels through “vertical” transmission, or from mother to child. In the U.S. it’s more often transmitted “horizontally” through sex and injection drug use. The opioid epidemic has caused a major spike. 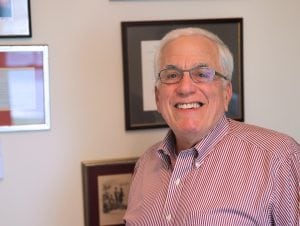 How did the foundation come about?

It was founded in 1991 by two couples in Doylestown, Pennsylvania, including a nurse and research scientist, who had seen the effect of the virus on a local family. They began with an annual budget of $50,000. Today it’s $9 million, which comes mostly from donations and federal, state and corporate research grants. In 2003 it opened the Baruch S. Blumberg Institute, which is named for the scientist who discovered the virus and developed a diagnostic test and vaccine. He won the Nobel Prize.

A pill introduced in 2016 cures Hepatitis C. Is Hep B far behind?

The challenge is that while the Hep C virus has three places you have to attack, Hep B has six, and they are located both at the core and surface of the cell. New cases can easily be prevented with a vaccine given at birth, although adults can get it, as well. But that doesn’t help people who already have the virus.

When will we have a cure?

We’re shooting for 2025. Given what we have learned about the virus, we calculated it can be done if we increase federal research funding by $37.8 million annually, which is nothing in terms of government spending. We are trying to convince Congress and scientists at the National Institutes of Health that it’s a winnable battle.