The girls’ soccer program at Haldane High School has been a standard for success, with six consecutive regional championships.

Succeeding Van Asselt is Ed Crowe, who moves over from coaching the junior varsity boys’ team. He also has coached the modified girls’ team. 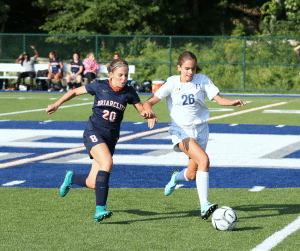 The team did not have enough girls to field both a junior varsity and varsity team, so it has a roster of 25, including a number of eighth-graders.

The keys to success lie with the defense and goalkeeping, Crowe said, to keep pace with a grueling schedule, with four games in seven days (including at Beacon on Sept. 22). The team plays with four midfielders and two strikers.

Key players, according to Crowe, include:

The boys’ team at Haldane is looking to improve on its 8-7-1 record last season, and the team to beat, says Coach Stephen Schweihart, is North Salem, the defending Class C state champions.

“We knocked them off twice during the regular season last year, 2-0 and 1-0,” he noted, which helped the Blue Devils win the league title with a 4-1-1 record. In the sectionals of the state tournament, North Salem got its revenge, scoring in the 100th minute to win, 1-0. (Despite the loss, Schweihart called it “one of the most unbelievable matches I have ever been associated with.”) 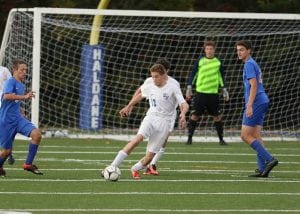 The coach says his team wants to be unpredictable this season by varying tempos to keep opponents off guard.

The team has 26 players, down from 30 last season. As with the girls’ team, Haldane did not have enough players to field a junior varsity squad.

“Our numbers have been down now for three years or so, but participation levels seem to be quite cyclical at Haldane,” Schweihart said. “Every three to five there is a drop, which is usually followed by a resurgence of similar length.”

Key players, according to Schweihart,  include: