Italian artist Michelangelo Pistoletto, whose works are in the collection at Magazzino, the art space in Philipstown, will re-enact his 1967 performance, Scultura da Passeggio (Walking Sculpture), at the Cold Spring waterfront at 12:30 p.m. on Saturday, Nov. 4. 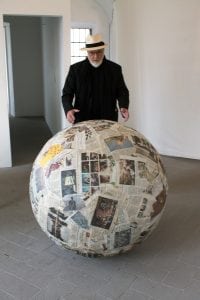 Michelangelo Pistoletto with an example of his “sphere of newspapers.” (Photo provided)

Working with local publications, including The Current, sent to him in Italy, Pistoletto created a sfera di gionali, or “sphere of newspapers.”

Pistoletto will invite the public to help roll the sphere along a portion of Main Street, then circle back to the bandstand where the artist, along with Magazzino founders Nancy Olnick and Giorgio Spanu, will share remarks.

The artist, who has donated the work to Magazzino, earned acclaim in the early 1960s for his Mirror Paintings and produced a set of works, Minus Objects, that are considered fundamental to the birth of Arte Povera, the movement predominantly featured at Magazzino. To visit the art space, see magazzino.art.