As a self-described stubborn teenager, Kit Burke-Smith was anti-jewelry. Or at least anti jewelry-making. Intrigued by working with metals, something she was exposed to at Interlochen Arts Academy in Michigan, she was more interested in making cups and bowls than adornments.

However, at the Rhode Island School of Design (RISD), where she enrolled as an undergraduate, the focus of the metalsmithing program was jewelry. 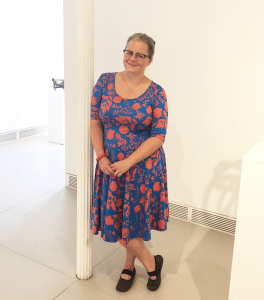 “Maybe that’s where my work was meant to go, and they saw it first,” says Burke-Smith, who lives in Beacon and is the newly appointed education coordinator at the Garrison Art Center.

At RISD, where she received a bachelor of fine arts in jewelry and light metals, Burke-Smith found the work more conceptual than practical.

“It was wearable, but you wouldn’t want to,” she says. “I try to make things that are thoughtfully made but accessible. It’s important to me that there’s thought behind how shapes are made, that it’s not just random.” 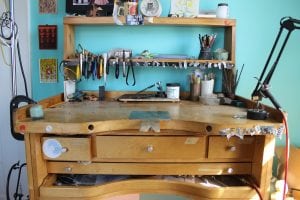 When Burke-Smith designs paired objects such as earrings, though they may look the same, they are not identical. “Earrings begin from a strip of metal which looks like a piece of linguini, sawed in half,” she says. “Seeing how the halves come out gives them a relationship. My wedding rings may have the same texture inside both, and only the couple wearing them knows. There’s a relationship not just between you and the jewelry; there’s another person in the conversation.”

Forgoing graduate school, Burke-Smith opted to learn by doing. “After RISD you could design for a commercial company,” she says. “Design, but not make. Or, the reverse, you could work in the production end of someone else’s designs.”

“I make my ‘Me and My Shadow’ earrings the same way each time, but on different days,” says Kit Burke-Smith. “They are asymmetric sterling silver loops paired with black neoprene loops made from the distorted shadow of the silver loops. At exactly 3 p.m. in the afternoon, the sun comes in at a right angle. I trace the shadow, then cut it out in metal and neoprene.

“I intentionally put them together so that the shapes are flipped in some way. They never line up perfectly and so the neoprene becomes the shadow of the metal. This way the shapes relate to each other but aren’t identical. Sisters but not twins! I like the fact that they’re related but don’t line up. Someone told me, ‘You should make jewelry that can only be worn on a rainy Thursday!’ ”

She moved to Brooklyn and freelanced for five years. “It was almost like being an apprentice,” she says. “I learned to work faster. I was meticulous but needed a faster pace in the real world. Eventually I felt like I had lost touch with the ‘mind’ side of things, and that’s when I decided to go to grad school” at SUNY New Paltz. 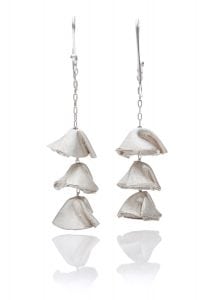 Burke-Smith’s designs combine what she learned at school with metalworking basics. “Sawing and piercing are two of the first skills learned in metalsmithing,” she says. “I like refining it using methods that are unique to me. It’s very low-tech, all cut by hand. I also do a lot of casting and fabrication, soldering with acetylene torches or oxypropane mini-torches. 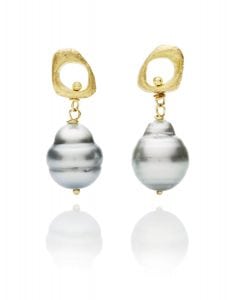 Earrings by Kit Burke-Smith made by pushing chunky sand into the wax, creating the texture. (Photo provided)

“I also work with sheets of thin wax, filing, cutting and carving, creating a mold which is then put in a kiln. You force molten wax into the negative space in the mold, then crack the mold. It’s sent to the city, and it’s kind of like magic: I send them waxes and they send back silver and gold.” 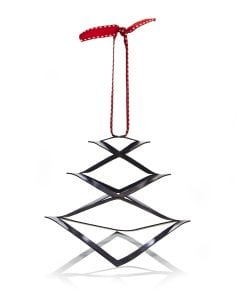 While attending SUNY New Paltz, she moved to Cold Spring and then, six years ago, to Beacon. There she has met many other women involved in the arts, including jewelers and metalsmiths. “We developed a kind of jeweler version of borrowing a cup of sugar: ‘I need to borrow a cup of flux,’ ” she says. (Flux is a paste for soldering.) 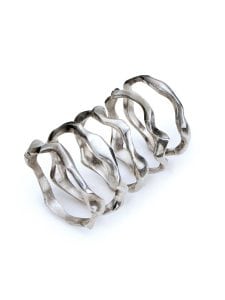 Burke-Smith also teaches metalsmithing, drawing, color theory and fiber design at New Paltz (“I get inspired by my students and by millennials in general. I think they get a bad rap. They have so much knowledge about what concerns them”), sells her work online and in a few galleries and stores, and does commission work such as wedding rings.

“I mainly design necklaces, earrings and rings,” she says. “Fewer rings, because they’re harder to sell because of the sizing requirement, but I love making them. I work mostly in sterling silver and 18K gold, and occasionally in neoprene rubber, Peruvian opal and Tahitian pearls.”