The Knights continued their impressive first season on Dec. 3, going 7 for 8 from the free-throw line. Ty Villella was 4 for 4 from the line while Zach Fox had his best game of the season. Owen Powers and Lincoln McCarthy both had a number of assists and a basket each. Luke Bozsik lead the team in scoring.

The Dec. 2 game was a defensive battle in the first half. Sarah Jones received a deft pass from Ruby Poses on an inbounds play and almost sank a short jumper from the left block, but it rimmed out. Loretto employed a full court press for much of the game. 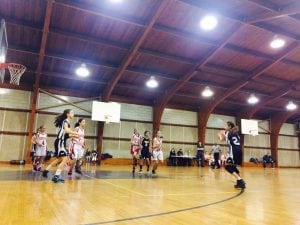 In the fourth quarter some nice passing between guards Camilla McDaniel and Eloise Pearsall and Finola Kiter and Poses yielded lay-ups. Emily Tomann and Amelia Kupper guarded the paint, with help from Elaine Llewellyn and Maggie Gordineer, and Clara Tripp. McDaniel had six points, and Poses and Pearsall each had four points.

On Dec. 3 the Knights faced a tough team from St. Patrick’s, who jumped to a 12-2 lead. Loretto battled back and cut the lead to 16-12, but in the fourth quarter St. Pat’s full-court press and swarming zone proved too much. Poses had six points, McDaniel and Gordineer each had four.