Repairs at Cold Spring’s  upper reservoir will be costly

Repairs to the upper reservoir dam off Foundry Pond Road will cost the Village of Cold Spring between $3.8 and $4.2 million, according to an engineering report presented to the Board of Trustees on Dec. 6.

The report, prepared by Tectonic Engineering and Surveying, outlined two approaches to repairing the aging dam. 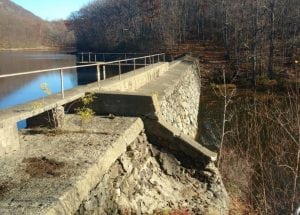 One scenario, with a single spillway, would cost about $3.8 million but result in water levels in the reservoir being lowered by 1.2 feet, a significant reduction in capacity.

The second option, which Tectonic recommended, would use a combination of service and auxiliary spillways at an estimated cost of $4.2 million. The auxiliary spillway would only come into play during extreme storms. 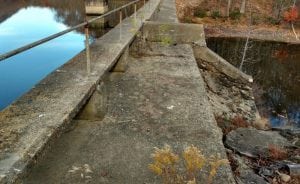 At the board’s Dec. 12 meeting, Mayor Dave Merandy said that residents who own property near the reservoirs are being contacted regarding easements required to access the dam with heavy equipment and cranes.

Permits also will be required from the Army Corps of Engineers, the Town of Philipstown and the New York State Department of Environmental Conservation.