Madison suggested 19 changes; it got whittled to 10

Today (Dec. 15) is Bill of Rights Day, marking the date in 1791 when the U.S. House and Senate approved the first 10 amendments to the Constitution.

James Madison, a representative from Virginia, proposed 19 amendments, which he wanted interwoven, rather than attached at the end. (He gave up on that.) The House approved 17, and after the Senate combined and altered them, 12 were sent to the states to consider. 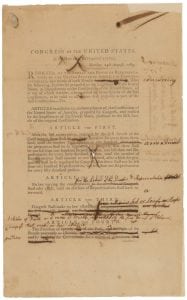 Handwritten revisions made during the 1789 debate by the U.S. Senate on amendments to the Constitution approved by the U.S. House (click to enlarge)

Of the 12, two were not ratified by enough states. One was a proposal that Congress not be able to give itself pay raises but only approve those that began with the next session. (This was adopted in 1992 as the 27th Amendment, although Congress still awards itself “cost-of-living adjustments.”)

The second set down a formula to determine the number of members in the House. Had it been adopted in 1791, the House today would have 800 or 5,000 representatives, depending on how its language was interpreted. Federal law limits the number to 435.

1. That there be prefixed to the Constitution a declaration, that all power is originally vested in, and consequently derived from, the people. That Government is instituted and ought to be exercised for the benefit of the people; which consists in the enjoyment of life and liberty, with the right of acquiring and using property, and generally of pursuing and obtaining happiness and safety. That the people have an indubitable, unalienable, and indefeasible right to reform or change their Government, whenever it be found adverse or inadequate to the purposes of its institution.

14. No state shall violate the equal rights of conscience, or the freedom of the press, or the trial by jury in criminal cases.