An easy win, and a nail-biter

The top-seeded Haldane girls’ basketball team rolled into the Section 1, Class C championship game with a 71-23 victory over Solomon Schechter at the Westchester County Center on Feb. 20. During the win, senior Allison Chiera scored her 1,000th point as a high school player and put her name on the Haldane gym banner.

Games to be Streamed Online

Both sectional finals will be streamed live with play-by-play commentary at stretchinternet.com.

The girls’ team (11-10) will take on the second seed, Keio Academy in Harrison, at 5 p.m. on Saturday, Feb. 24, at Pace University. The teams have not met this season. 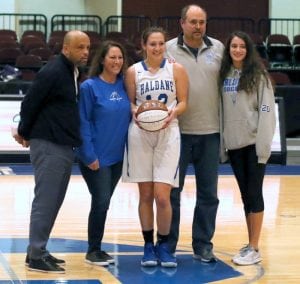 The boys’ team, seeded second in Section 1, Class C, had a much tougher — and more dramatic — time against No. 3 seed Tuckahoe. Haldane trailed after each of the first three quarters and needed an offensive rebound and put-back by senior Liam Irwin just before the buzzer to tie the game in regulation.

The Blue Devils then dominated the overtime, winning 63-54. 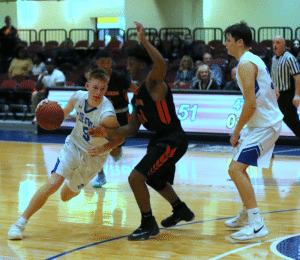 Matt Champlin (5) drives to the basket with the Blue Devils down by two and less than 10 seconds remaining. He would miss the shot but Liam Irwin (right) rolled to the basket, grabbed the rebound, and tied the game. (Photo by Scott Warren)

Senior Nick DiPalo had 19 points for Haldane, while sophomore Matt Champlin finished with 18 and Irwin scored 13 and grabbed 11 rebounds. Tuckahoe’s star, Malik Moore-Crooks, who averaged 25.4 points per game, was held to 21, although he added 12 rebounds and four assists.

Both games take place at the Goldstein Fitness Center, 861 Bedford Road, in Pleasantville; use Entrance 1 or 2 into the university, off Route 117. Take Route 9 south to the NY 117 exit (Pleasantville/Sleepy Hollow). It’s about a 40-minute drive.

Parking is free and security will direct vehicles to Lot F. Admission is $8 for one or both games ($5 for students, veterans and seniors), and tickets can be purchased at the door or in advance at gofan.co/nysphsaa1.

Mike Wynn, the associate athletic director at Pace, recommends Craft Pizza & Beer or Sal’s Pizza & Pasta, both in Pleasantville, for a quick meal.