A benefit for Sharon Acocella on Feb. 27 at The Foundry Cafe in Cold Spring, was a “huge success,” said its host, owner Jeff Consaga. Acocella, who works at the cafe, is recovering from pneumonia. 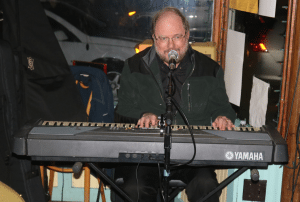 In addition to donations collected at the door, funds were raised online and at local shops.  Numerous Cold Spring businesses contributed food, beverages and silent auction items. Area musicians provided entertainment, among them Rupert Holmes, who sang his hit song “Escape (The Pina Colada Song),” from his 1979 album, Partners in Crime.

Consaga estimates that as many as 200 people attended Tuesday’s party. A second benefit is being planned for the afternoon of March 25 at the Elks Club in Peekskill.