Two Philipstown regulatory boards plan reviews next week of projects at opposite ends of town: a cell tower proposed for southern Philipstown and the planned Hudson Highlands Reserve development off Horton Road.

The Zoning Board of Appeals scheduled a public hearing for Monday (March 12) on a proposal by Pamal Broadcasting to replace a WHUD radio and Sprint telecommunications tower at 22 Sky Lane.

According to Robert Gaudioso, an attorney for the Beacon-based firm, the original tower was approved in 1957 for radio transmission and the proposed tower would largely replicate that. However, unlike its 60-year-old predecessor, the replacement will carry antennas for Sprint and Verizon Wireless plus upgraded equipment for Putnam County emergency services and first-responders.

Gaudioso also represents Homeland Towers LLC, which, with Verizon Wireless, is suing the town over rejections of their application for a cell tower on Vineyard Road, near Cold Spring and Nelsonville.

In a letter, Thomas Lannon, the director of information technology and geographic information systems for Putnam County, told the ZBA that his biggest concern “is the poor coverage within the western part of the county and the lack of true interoperability within county agencies and other municipalities.”

Lannon described the WHUD tower as “critical for our emergency radio system” but said the existing structure tower cannot support the county’s equipment.

At a workshop on Thursday (March 15), before its regular monthly meeting, the Planning Board will continue its discussion of the proposed Hudson Highlands Reserve, a development that covers 210 acres at Horton Road, Route 9 and East Mountain Road North. The project involves 25 houses, each on a 1-acre lot, surrounding a large pond, plus an equestrian center. The developers have proposed the project as a “conservation subdivision,” which enjoys certain zoning exemptions.

When the Planning Board on Feb. 15 continued a public hearing begun in January, it received another round of mostly negative comments. 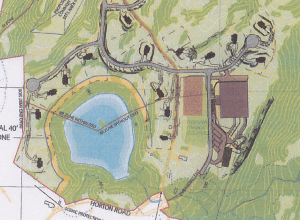 Detail from the plan for the Hudson Highlands Reserve project

Dave Merandy, Cold Spring’s mayor, who owns a property on East Mountain Road North, repeated criticism by others that “this is not a conservation subdivision.”

Merandy, a contractor and former Town Board member, said Philipstown’s zoning code envisioned conservation subdivisions as clustering houses and other buildings “in a tight area,” to optimize undeveloped land and natural resources. He advised the Planning Board to eliminate the unbuildable areas from the total acreage and calculate the number of structures appropriate on what’s left.

Andy Galler, a member of the Philipstown Conservation Board, emphasized its concerns. He read a statement in which the board recommended the developers prepare a detailed environmental impact statement to ensure that the project’s ramifications “are better planned and fully considered.”

The Conservation Board believes the project will significantly affect the site, “primarily through forest fragmentation.” Reducing the lot sizes, or number of houses, around the pond would provide a wider wildlife transit corridor to undeveloped land and “help eliminate the impact of fragmentation, provide a higher level of protection of water resources,” and enhance conservation overall, it said.

Furthermore, the Conservation Board stated that the complex would have a network of new roads, another concern; urged the reconsideration of the equestrian center size and location; and sought examples of storm water and wastewater management plans, which it called “essential for the long-term protection of water resources on-site and for Clove Creek,” which crosses the property.

“How much water is going to be sucked out of the aquifer we all count on?” asked Julia Famularo, a neighbor to the planned project. The Clove Creek aquifer is Philipstown’s largest.

Garrison resident Noel Kropf also expressed fears for the aquifer. “It would be some sort of travesty” if a conservation subdivision produced more sprawl and conserved less land than a traditional one, he said.

The Planning Board workshop begins on March 15 at 7 p.m. at the Old VFW Hall, 34 Kemble Ave., in Cold Spring.