Two are airlifted to hospital

Three people were injured on Wednesday (April 18) in a head-on collision on Route 9 in Philipstown. 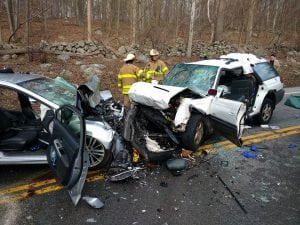 Three people were injured in a head-on crash on April 18 in Philipstown. (GVFC photo)

The New York State Police identified the victims as Margaret A. Tornowsky, 68, and Thomas N. Tornowsky, 69, of Croton, and Terrence M. Jones, 50, of Wappinger. They said the Tornowsky vehicle, heading southbound, failed to keep right.

In a Facebook post, the Garrison Volunteer Fire Company said two medical helicopters that landed at the firehouse on Route 9 about 3 miles south of the crash took two victims to the hospital and that a third was transported by ambulance.

According to the GVFC, a number of Good Samaritans assisted with traffic control, including Capt. Mike Gallo of the East Fishkill Fire Department, who happened to be passing by, until first responders arrived.

Other agencies that responded included firefighters from Continental Village, which handled the helicopter landings; North Highlands, who directed traffic and assisted with extracting the victims; ambulance crews from Garrison, Peekskill and Philipstown; paramedics from Cortlandt and Putnam County; and officers from the Putnam County Sheriff’s Office and New York State Police.