Fifty years ago in Philipstown, crews filmed scenes for the musical Hello, Dolly!, starring a 26-year-old Barbra Streisand. A longtime fan, Christopher Radko, along with a host of other Highlands residents, will celebrate the anniversary with, at last count, 18 events spread over five months.

Hello Again, Dolly! kicks off Saturday, May 12, with a members-only reception for an exhibit at the Putnam History Museum in Cold Spring that looks back at the film’s influence on Philipstown, West Point, Peekskill and Poughkeepsie, all of which hosted the cast and crew or served as settings over the summer of 1968. (The exhibit opens to the public on Sunday, May 13.) 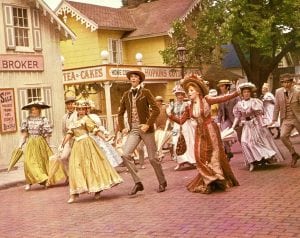 Tommy Tune leads the parade with Barbra Streisand on a decked-out Garrison’s Landing during filming in June 1968. (20th Century Fox)

The setup crew traveled from Hollywood in March, and set-construction took place on Garrison’s Landing and nearby in April and May. Director Gene Kelly and cast members Streisand, Walter Matthau and Tommy Tune arrived on June 1 for a month of shooting. 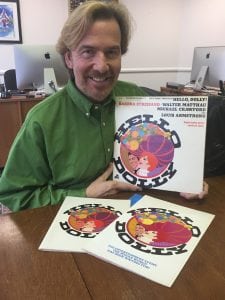 Christopher Radko with some of his Dolly memorabilia (Photo by A. Rooney)

Radko says he can still recall when his father, a cardiologist in Westchester County, the following year was given tickets by a grateful patient to the film’s New York premiere. “I was only 9, and I knew nothing about any of it — it was so trippy,” he recalls. The film is set in Yonkers in the 1890s, which wasn’t anything Radko recognized.

Four decades later, he discovered that Yonkers had been played in the musical by Garrison’s Landing, and he paid a visit. He fell in love with the hamlet and eventually rented a home there. He sees the festival as a civic contribution.

“I dreamed it up about two years ago,” he says. “It’s a 50th-anniversary celebration that I know I would love to attend. It’s a celebration of the filming in the Highlands and also of the beauty of the landscape and the rich history of this community.”

Although organizing has been immense and fundraising a challenge, he says the effort “will all be worthwhile if I can get everyone to see the joy of it.” The film, he says, is “a way of finding home — a place where you show up and be who you are to the fullest.”

The Putnam History Museum exhibit, which runs through November, includes a number of costumes worn during filming by the actors who portrayed Cornelius Hackl, Irene Molly and Ermengarde, as well as one of Streisand’s hand-delivered by a collector who lives in Barcelona. 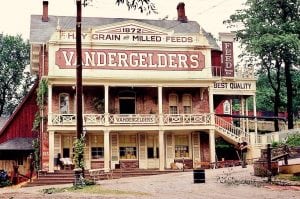 The Golden Eagle building at Garrison’s Landing was transformed in 1968 into Vandergelder’s. (Photo provided)

Also on display are Gene Kelly’s copy of the script and other memorabilia, much of it provided by his widow, Patricia, who will be in town on July 1 to give a presentation about his life. There are also many behind-the-scenes photographs, foreign film posters and original design drawings.

On Tuesday, May 15, the children of the Garrison School will be saluting their parents and grandparents, some of whom were extras in the film, with Dolly songs during their spring concert. On May 18, the Desmond-Fish Library will screen The Matchmaker, the 1958 film based on Thornton Wilder’s play, which was also the basis of the musical. 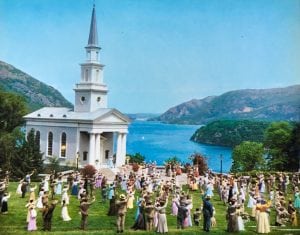 A scene was filmed at Trophy Point at West Point; the chapel was assembled in Garrison and flown over the river by helicopter. (Photo provided)

On May 31 and June 2, the Garrison Art Center will present hat-decorating workshops (think ribbons, flowers and Victorian embellishments) as lead-in to a June 16 “Put On Your Sunday Clothes” costume parade led by Tommy Tune from the Garrison’s Landing bridge to Depot Square.

Tune, who made his Broadway debut in 1965 and has won 10 Tony Awards for acting, choreography, direction and lifetime achievement, will answer questions afterward while everyone enjoys an ice cream social. He will also perform the next afternoon at the Paramount Hudson Valley in Peekskill.

The River Rose paddlewheeler will depart from Garrison’s Landing after the parade, returning in time for an outdoor screening of Hello, Dolly! in the park. The following weekend, Phil Geoffrey Bond of Garrison will host a cabaret show focused on Streisand at the Depot Theatre.