In her new book, Lyme: The First Epidemic of Climate Change, former Poughkeepsie Journal reporter Mary Beth Pfeiffer examines how the dramatic increase in Lyme disease in the U.S. since the 1970s correlates with climate change. In an interview last week, she discussed her findings and the risks facing the Highlands. Her responses have been condensed. 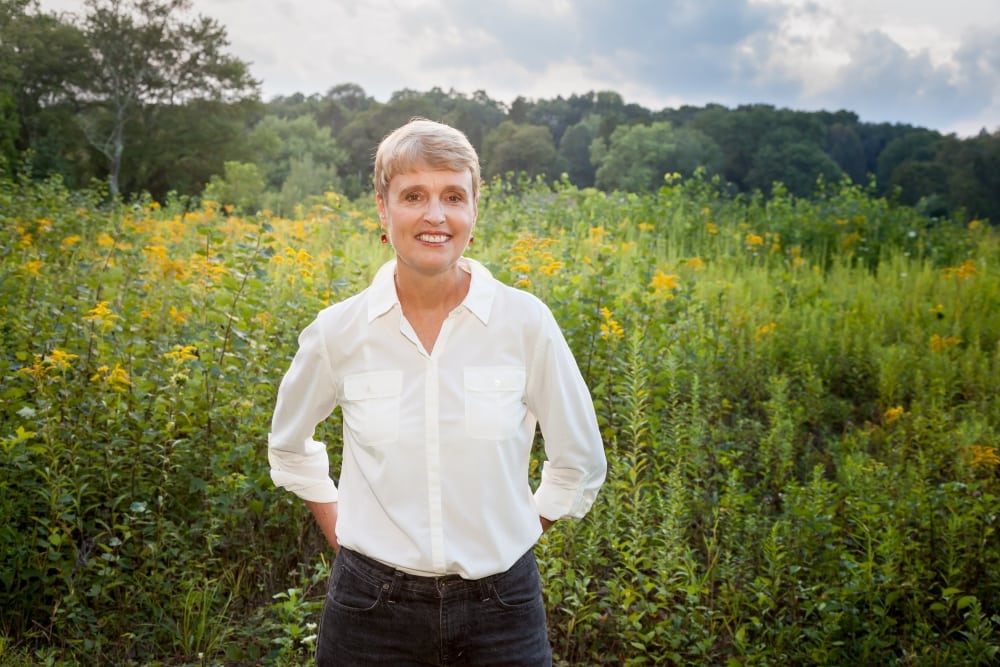 You reviewed quite a bit of research on Lyme disease, which is spread through tick bites. What did you find most compelling?
What clinched it for me was a 2014 Environmental Protection Agency report that listed three health indicators used to track climate change: the longer, earlier and more intense weed pollen season; the number of health-related deaths; and the number of Lyme disease cases. Lyme is the only disease the government uses to track climate change.

Scientists are finding that as places become warmer, there are more ticks. In Canada, ticks are moving farther north each year. And data in the 1950s showed that ticks only survived at a certain altitude on a mountain in Eastern Europe. Forty years later, ticks were found at much higher altitudes. That is a microcosm of what is going on around the planet. 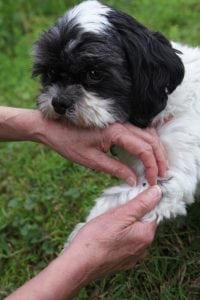 Pfeiffer removes a tick from her dog, Bushwick. (Photo by Janet Graham Gottlieb)

It’s not just the black-legged tick, which is common in the Northeast, that is moving because of climate change. The lone star tick has migrated from the South and arrived in Long Island, where it is causing big problems.

How do birds factor into the spread of Lyme?

For eons birds carried ticks as they migrated north from South and Central America. But in the past, if they dropped a tick from Brazil in the Eastern U.S., the tick would die. Now they survive, and they also carry more pathogens.

If the Highlands become hotter and drier, would that reduce the tick population?

It’s unlikely we will get too dry. We may have periods of drought and intense heat that make it more difficult for ticks. But even in the South, where it’s very hot and getting hotter, it’s still very humid. Ticks can go beneath leaves or into the soil and stay moist, coming out when it’s humid enough to survive.

In the book, you discuss how the threat of the Zika virus was reduced by genetically modifying mosquitoes so they only produced male offspring. Could that work with ticks?

A mosquito has a two-week life span; ticks live for two or three years. It would take many generations of ticks for that approach to take hold. But I would love to see research along those lines.

Are there more promising solutions?

The Cary Institute of Ecosystem Studies in Millbrook is conducting a five-year tick project aimed at controlling ticks in neighborhood yards. But we need a lot more money spent on figuring out how to control ticks, such as a vaccine that would kill a tick when it bites a human. A vaccine could also be used to kill ticks as they feed on mice and deer. It could stop the epidemic dead in its tracks.

What can be done in the meantime?

People need be vigilant. Cover up when you go outside, check yourself when you come inside. Use permethrin-impregnated clothing; it kills or causes ticks to fall off when they come in contact. That clothing is rather expensive although permethrin itself isn’t. You spray it on, let it dry; it survives about six launderings.

We need to protect our children; 5- to 14-year-olds are the largest group infected each year. Make your yard safe. Don’t have leaf or brush piles. Open it up to the sun. Ticks generally don’t like hot, sunny areas.

Can we stop Lyme?
We have the ability to conquer it. I’m a little pessimistic because we haven’t had the will or put the money into it. We need to convince the powers that be that this is a serious, underestimated epidemic that leaves many people ill long after they’re infected. Then, the will and the money will follow.

Into the Wild
Wrenches in the System
Resilient Landscapes
Saying Goodbye
Could Trees Save Us?
So Long, and Thanks for All the Fish