As the climate changes, the Hudson gets weirder

No forecasting about the climate and ecological health of the Highlands can be made without taking into account how global warming will affect the most important and vulnerable part of its landscape, the Hudson River. But when it comes to the effects of climate change on the estuary, the future is here.

For years, scientists have looked at the declining numbers of migratory fish returning to the Hudson, such as shad, sturgeon and striped bass, and blamed aggressive offshore fishing operations. But now many are thinking that rising water temperatures may be at fault, as cold-water species bypass the river for cooler latitudes.

“We’re seeing evidence of what sure looks like climate change affecting distributions of where fish are, and seeing habitats that no longer are as good as they were before,” says Karin Limburg, a professor at SUNY’s College of Environmental Science and Forestry in Syracuse.

At the same time, invaders arriving from the South are working their way upriver from the Atlantic. Over the past 15 years, scientists have seen a steadily increasing number of “tropical marine strays” in the Hudson, she says.

How these species will coexist with native fish, and what diseases they may bring with them, is anyone’s guess. But unlike birds migrating north, many fish species will never reach the Highlands. “They can’t just hop on the bus,” says David Strayer, a freshwater ecologist at the Cary Institute. “There’s going to be this asymmetry for at least a few centuries. We’ll see more extinctions than arrivals.”

Meanwhile, the warmer water temperatures will make life rough for some unwelcome transplants, such as the zebra mussel. Native to Russia and the Ukraine, the voracious plankton feeders began showing up in American waterways in the late 1980s after stowing away in the ballast of ships. Although they quickly wreaked havoc on ecosystems, the bivalves are extremely sensitive to temperature changes, and even minimal increases could cause massive die-offs.

Does that mean some aspects of climate change in the river could be … beneficial?

“There’s going to be a wide range of impacts,” says Strayer. “It very much depends on your viewpoint. The Coast Guard spends a lot of money breaking ice in the river to maintain its navigability. So if there’s less ice because of warmer temperatures, the Coast Guard will rejoice, but the ice boaters will weep.”

Global warming will expose the Hudson’s vulnerabilities. The river has one of the world’s highest “nutrient-loading rates,” a measure of the concentration of organic matter coming in from outside sources.

With the Hudson, that’s mainly sewage. If the sewage sticks around, it gets consumed by microbes, which leads to runaway algae blooms that can suffocate marine ecosystems. For now, the Hudson flushes itself well, clearing out organic matter before it turns into blooms, but Limburg notes that flow rates can change. “We know that the storms are changing in intensity, frequency and magnitude, but there are probably going to be more droughts, too. And in droughts, the flow rates drop way down.” 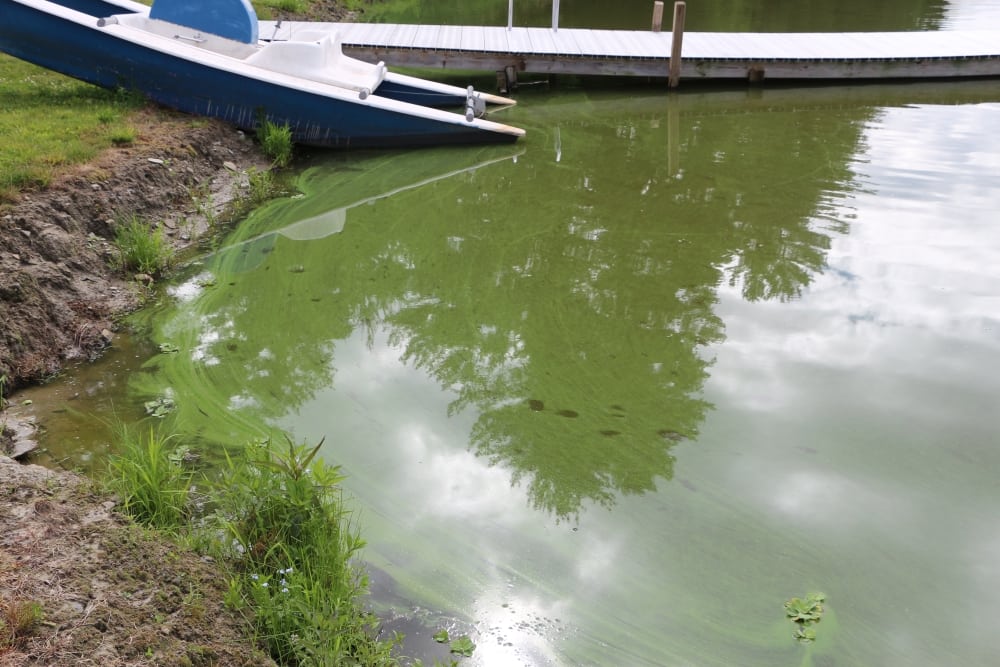 A bloom in Dean’s Pond, near Kent (DEC)

Finally, there’s the question of how the river will react to whatever we construct to counter the effects of climate change. For instance, a flood gate near Manhattan could impede the flow of migratory fish. If Metro-North builds bulkheads to raise the train line, the infrastructure could further isolate the river from the floodplains, altering the river’s flow rates even further.

If the infrastructure is designed thoughtfully, with its ecological impacts in mind, the damage to the river could be minimized. But if it ends up being designed and implemented quickly in response to an immediate disaster, scientists worry these considerations won’t be taken into account.

“Ecologists are always accused of responding to everything with ‘Well, it depends,’ ” says Strayer. “But in this case it really does depend. All we can say is that these actions are going to range from having a modest to an enormous ecological impact.”

Into the Wild
Wrenches in the System
Resilient Landscapes
Saying Goodbye
Could Trees Save Us?
The Climate for Lyme

One thought on “So Long, and Thanks for All the Fish”