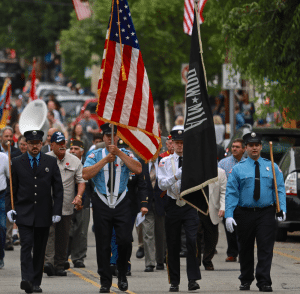 Flag Day is Thursday, June 14. The flag code, outlined in Title 4 of the U.S. Code, Chapter 1, was created during a National Flag Conference held in 1923 and revised 16 times by Congress, most recently in 2017. Excerpts from the Code follow. For the full text, see legion.org.

§ 6. Time and occasions for display

The flag may be displayed 24 hours a day only if illuminated.

The flag should be hoisted briskly and lowered ceremoniously.

§ 7. Position and manner of display

The flag, when carried in a procession, should be either on the marching right; that is, the flag’s own right, or, if there is a line of other flags, in front of the center of that line.

No other flag or pennant should be placed above or, if on the same level, to the right of the flag, except at the headquarters of the United Nations. When flags of two or more nations are displayed, they are to be flown from separate staffs of the same height. International usage forbids the display of the flag of one nation above that of another nation in time of peace.

When the flag is displayed in a window, it should be displayed with the union or blue field to the left of the observer in the street. 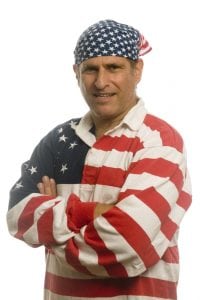 The flag should not be dipped to any person or thing.

The flag should never be displayed with the union down, except as a signal of dire distress in instances of extreme danger to life or property.

The flag should never touch anything beneath it, such as the ground, the floor, water or merchandise.

The flag should never be carried flat or horizontally, but always aloft and free.

The flag should never be used as wearing apparel, bedding or drapery.

The flag should never be used for advertising purposes. It should not be embroidered on such articles as cushions or handkerchiefs and the like, printed or otherwise impressed on paper napkins or boxes or anything that is designed for temporary use and discarded.

No part of the flag should ever be used as a costume or athletic uniform. However, a flag patch may be affixed to the uniform of military personnel, firemen, policemen and members of patriotic organizations.

The flag, when it is in such condition that it is no longer a fitting emblem for display, should be destroyed in a dignified way, preferably by burning.

§ 9. Conduct during hoisting, lowering or passing of flag

During the ceremony of hoisting or lowering the flag or when the flag is passing in a parade or in review, those present in uniform should render the military salute. Members of the Armed Forces and veterans not in uniform also may salute.