On June 9th, 2015, Allison Pataki and her husband, David Levy, were flying to Hawaii for their “babymoon,” as Pataki was five months pregnant with their first child.

The plane never made it. Instead it was rerouted to North Dakota because on the flight, Levy — a 30-year-old former athlete who was completing a residency as an orthopedic surgeon — suffered a rare bithalamic midbrain stroke and lost consciousness, an event so rare in someone as young as Levy that the doctors in the Fargo hospital warned Pataki that even if her husband survived the event, there was no reference point as to what the long-term damage would be, or even who he would be after he awoke. 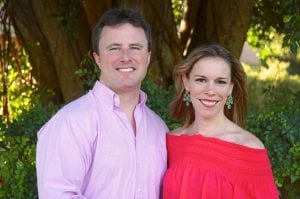 As Levy lay unconscious in the hospital, Pataki, an author of three bestselling novels, did the only thing she could. She began writing. I’m still lucky to have you, she wrote. But I’m sorry that it took you having a stroke for me to realize that.

Over the next 365 days, Pataki continued writing letters to her husband throughout his remarkable recovery. Those letters became the basis for her newest book, a memoir, titled Beauty in the Broken Places.

Speaking from their home in Philipstown, where the couple moved last year to be closer to Pataki’s family and for Levy’s job (he now works as a medical consultant) the events chronicled within the book seem no less miraculous three years later.

“When Dave woke up, he was less functional than a newborn,” Pataki said. “Newborns can breathe on their own, and Dave couldn’t. He couldn’t swallow. Every bodily function was either being regulated or monitored. Now I think anybody who met him would be hard-pressed to believe that he suffered as massive a stroke as he did.”

Even though Levy recognized his wife as soon as he awoke, and remembered other bits of his life, it was months before his short-term memory returned. But Levy was young enough and strong enough that his brain was able to adapt and essentially regrow itself, from a newborn brain to an adult brain. 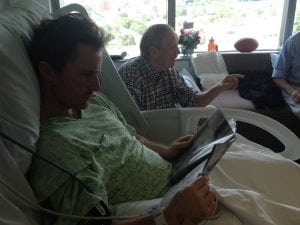 Levy attempting to read while recovering. His father-in-law, George Pataki, is in the background. (Photo provided)

“Neural plasticity is a remarkable thing,” said Pataki. “He went through an entire lifetime of growing a brain in a year.”

Although doctors warned Levy that he would never fully recover, today he feels fine. “I don’t know if there are any underlying deficits I still have that I’m just not aware of,” he said. “But things are going great.”

Today the couple marvels at how their lives have changed.

“Our priorities have shifted,” said Pataki. “Prior to the stroke, Dave was literally working himself to death. Sleeping for four hours a night. Working every weekend, every holiday. This stroke has allowed Dave to take a step back, make a career transition, and we have a much better work/life balance and a deeper gratitude for the time we have as a family and what matters.” 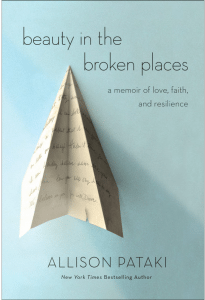 The cover of Pataki’s book

Levy believes that one of the biggest factors in his recovery was that, as a doctor himself, he knew to trust his medical caretakers, even when he didn’t agree with, or understand, what they were doing. “Trust the process,” he said. “When I saw people recovering the least, it was because they were the most combative. You lose a lot of power, but if you embrace that, you can trust the system and let your [medical] caretakers do what they do best.”

Pataki said she learned throughout Levy’s recovery that, in the case of someone with a brain injury, the most important thing a family member can do is to not be afraid to ask for help. “A brain injury is a really hard injury to watch someone recover from,” she said. “It cracks you open and you need to be vulnerable in a way that maybe you haven’t been before. Lean on your network, admit when you are at your wit’s end and when you need support.”

One of the people that Pataki leans on in the book is Lee Woodruff, whom she met when the two women were working at ABC News. Woodruff’s husband, anchor Bob Woodruff, suffered a traumatic brain injury in 2006 when he was hit by a roadside bomb while covering the Iraq war. Although the two women didn’t know each other well, Woodruff consoled and advised Pataki when the situation looked bleak.

At one point, Pataki asked Woodruff why she took so much time to help someone to whom she hadn’t been that close. Woodruff responded in the book that “someday, years from now, someone will need to hear from you about this moment. And so you’ll find yourself speaking to someone who needs you, and you’ll tell this person that they can get through whatever it is that they are going through. That’s all part of the deal, OK?”

With Beauty in the Broken Places, Pataki attempts to return the favor by providing an honest assessment of what it’s like when a loved one suffers a traumatic brain injury, either by stroke, injury or violence.

“We’ve been hearing from people opening up and sharing their own personal stories and reacting to it in an intense way,” Pataki said about the book’s reception. “You can relate to a fictional character and obviously an author puts pieces of his or herself into fictional characters, but this is on a whole new level in terms of being personal. It invites a reader to relate to both the material and relate to you, the writer, so much more.”