Would provide alternative to driver’s license

It’s easy for anyone who has one to overlook how often a driver’s license is used as identification: picking up children from school, visiting family members at the hospital, buying cold medicine at the drugstore, applying for a library card.

A valid ID can be especially valuable for undocumented immigrants, which is why it’s being pushed by Nobody Leaves Mid-Hudson, an immigrants’ rights group based in Poughkeepsie. The city council there last month unanimously passed a measure creating IDs for residents, making it only the second municipality in the state to do so after New York.

Beacon may be next. The City Council plans at its Monday, Aug. 13, workshop to discuss creating a municipal ID.

“Poughkeepsie’s done the hard work already for Beacon, Kingston, Middletown, Newburgh and the other Hudson Valley cities moving toward a municipal ID,” said Jonathan Bix, the executive director and co-founder of Nobody Leaves Mid-Hudson. “There’s no need to reinvent the wheel.” 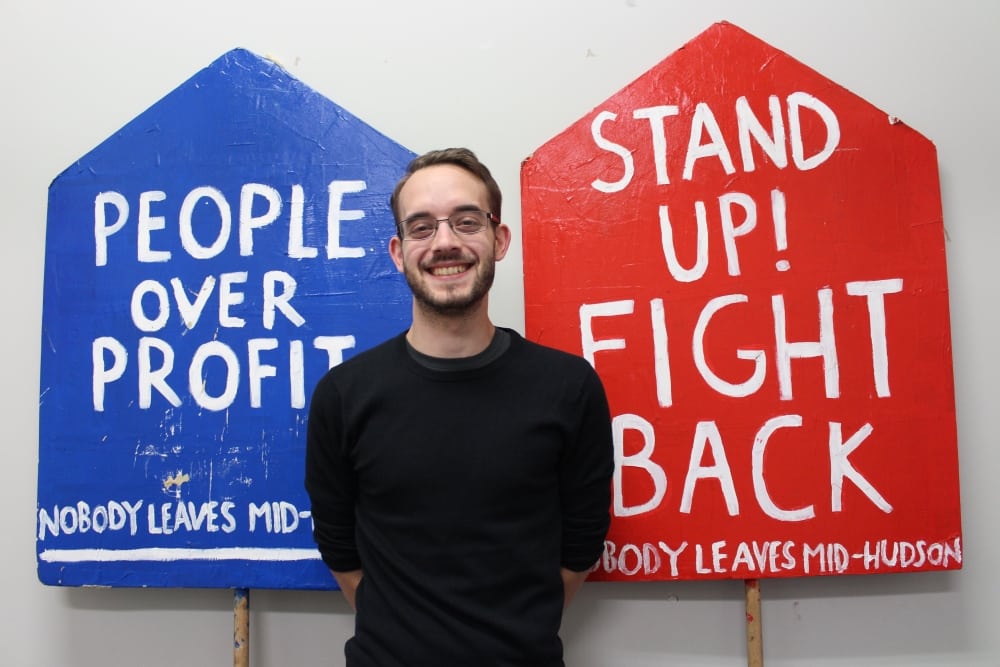 Amber Grant, a member of the Beacon City Council, says she supports the idea because the difficulty of obtaining government-issued identification creates an “access gap” for some residents.

In a statement released by Nobody Leaves Mid-Hudson, Beacon Mayor Randy Casale was quoted as expressing support for municipal IDs but in an interview said he wanted to make sure they weren’t already available. “You can get a non-driver’s ID at the DMV,” he said. “Are we duplicating something that’s being done already?”

However, unlike non-driver IDs offered by the Department of Motor Vehicles, municipal IDs do not require a Social Security number or birth certificate. Applicants must provide documentation but it can include visas, foreign passports or consular cards. The card is also an option for anyone who is homeless or has difficulty obtaining an original birth certificate, said Bix. 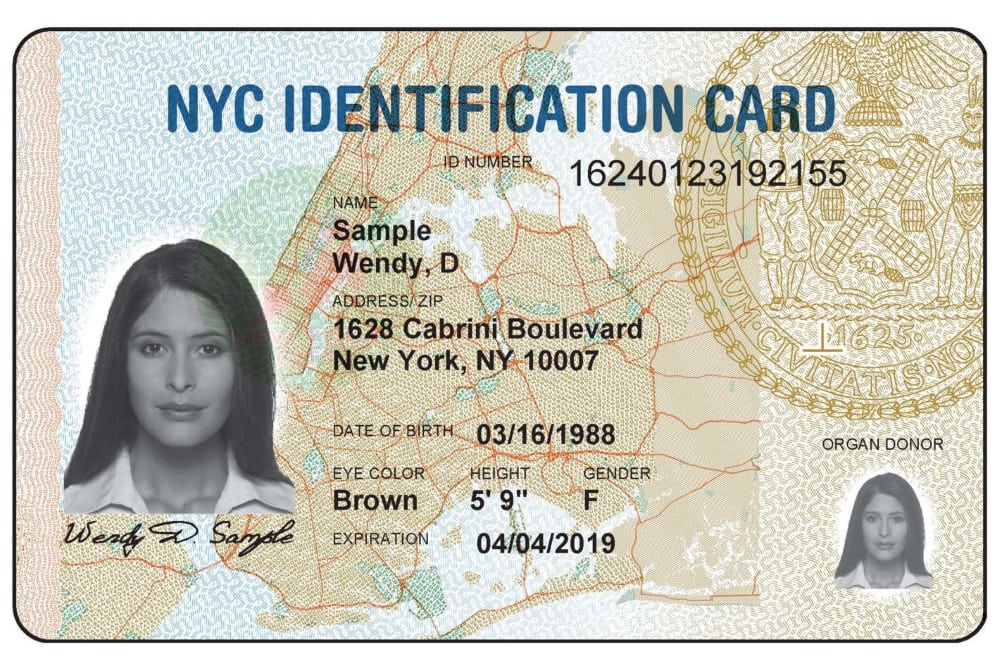 An example of the ID card that can be requested by residents of New York City. (Image provided)

The IDs also do not indicate gender, which can benefit transgendered individuals. “If the only forms of ID someone has misgenders them, it can lead to housing discrimination, employment discrimination and difficulties accessing medical care,” he said.

In New York City and Poughkeepsie, the cards have other uses. Businesses and cultural organizations can offer discounts, and cities could promote each other by extending offers to residents of other municipalities.

“I love the idea of having people from Poughkeepsie or Newburgh come to Beacon and get discounts at restaurants or Dia,” said Grant. “It would be a great way to tie all of our cities together.”

What You Need in Poughkeepsie 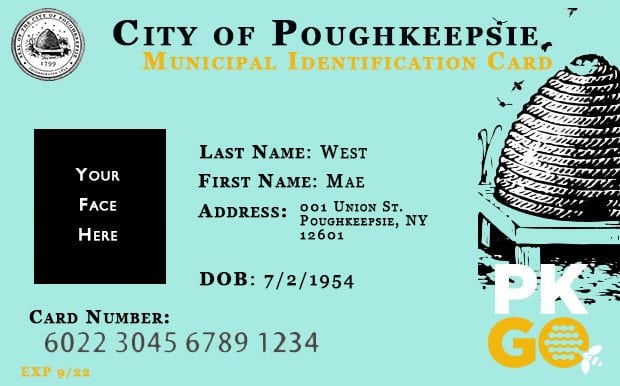 A mockup of a Poughkeepsie identification card created by Sarah Salem, a member of the Common Council. (Image provided)

In order for a Poughkeepsie resident to obtain an identity card from the city, he or she must provide a U.S. or foreign passport, state driver’s license, state ID, permanent resident card, consular ID card, ID from a foreign country, foreign driver’s license, U.S. for foreign military ID or a current visa issued by a government agency.

If those documents are not available, the applicant can submit a green card, naturalization certificate, a U.S. government ID or tribal photo ID, or a state veterans’ photo ID, along with a Social Security card, electronic benefit transfer card, high school or college diploma, taxpayer ID number or authorization with a photo ID, or a voter registration card.

Sarah Salem, a member of the Poughkeepsie Common Council, likened it to the Mid-Hudson Library system, which allows a Beacon resident to use his or her card from the Howland Public Library to check out books in Cold Spring or Garrison.

Bix said the cards could also lead to safer communities, because studies suggest people without valid ID are less likely to report crimes or interact with police. 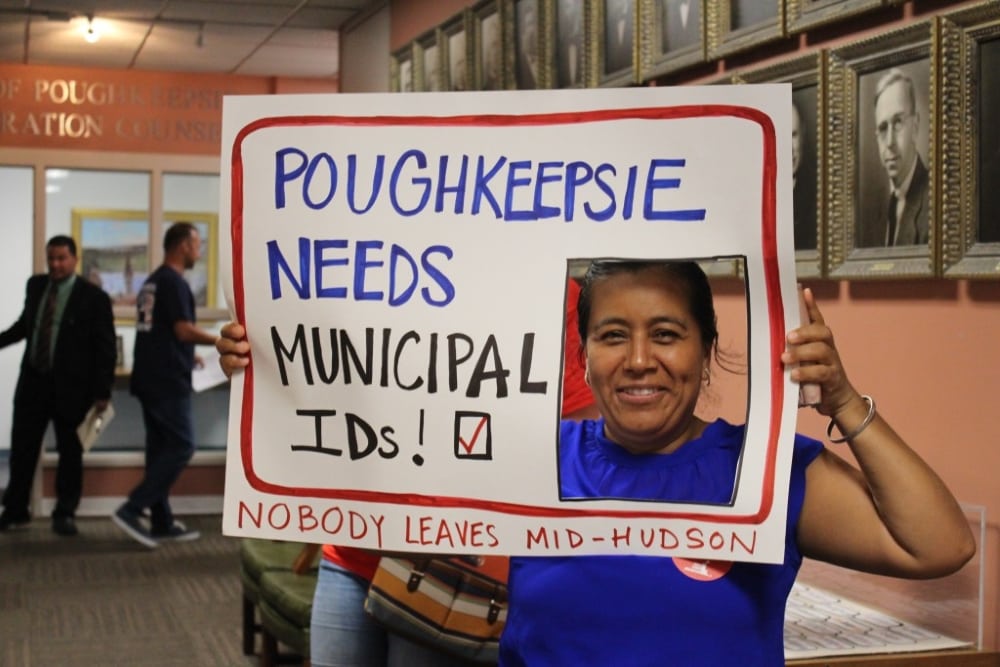 A member of Nobody Leaves Mid-Hudson showed her support for an initiative to create Poughkeepsie identification cards. (Photo provided)

While the cards can’t be used to register to vote — that requires a Social Security number — Salem said she hoped the Poughkeepsie card will be accepted by poll workers. She said the city is also working with banks to allow cardholders to open checking accounts.

In Beacon, Casale said he wants to hear more about the program on Aug. 13, especially whether it would require the city to hire additional staff or place a burden on the City Clerk’s office. He said Beacon could offer the cards only on certain days, or by appointment, so “we don’t get slammed.”

Poughkeepsie plans to hire a part-time staff member to implement the program but hopes to offset the costs with a $10 initial fee ($5 for seniors and children and teenagers younger than 16) and $5 for renewals every four years. Waivers are available for those under financial hardship.

“This is one tiny and affordable step that a city can do to offer some sense of relief and a sense of belonging to their community,” Salem said.