The Beacon High School football team held a tenuous 3–0 lead at halftime Saturday (Sept. 22) against Mount Vernon, but the visiting Knights spoiled the day by scoring a second-half touchdown for a 7-3 win at Hammond Field.

It was the first time this season Beacon (1-3) was held without a touchdown.

“We made three trips to the red zone [inside the opponent’s 20-yard line], but we had some costly penalties that hurt us,” said first-year Coach Jim Phelan. “We have got to learn to finish drives, make big plays when they’re there.” 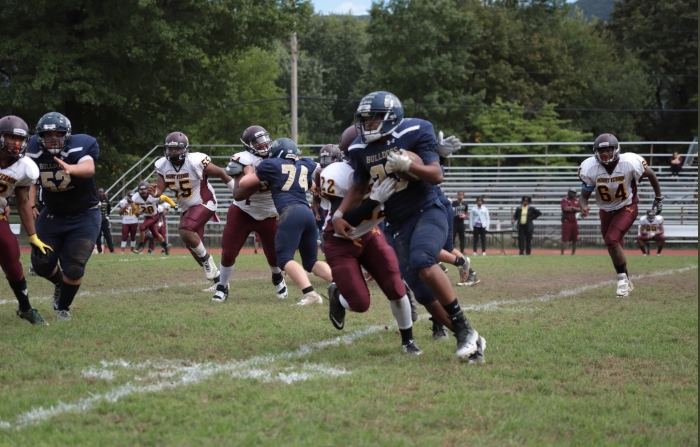 The Bulldogs (in blue) fell short against Mount Vernon. (Photo by Rem Dinio)

Phelan said that with three freshman starters (quarterback Jason Komisar, tackle Tyler Haydt and center Ahmir Bell), “it can be a little tough on the seniors to go through a learning-and-growing phase.”

Manny Garner led the Bulldogs with 122 yards rushing. “He’s been a workhorse, along with Willy Rivera Jr. and Santino Negron,” the coach said. “Komisar also ran well for us [37 yards on four carries] and Trey Dinio [at defensive end] and Joe DeCandia [at safety] had great games.”

Beacon travels to Gorton (2-2) tomorrow (Sept. 29) for a 1:30 p.m. kickoff. “They’re a physical and athletic team,” Phelan said. “It’s an opportunity for our guys to play some good competition, which will only make us better.”