The Haldane High School girls’ soccer team is headed to the state Final Four after edging Millbrook, 3-1, in overtime on Wednesday (Oct. 31) in the regional final at Arlington High School.

Haldane will play in the state semifinal at Cortland High School, north of Binghamton, on Saturday, Nov. 10, against AuSable Valley High School from upstate Clinton County. The semifinal winners play Nov. 11 at SUNY Cortland for the Class C championship. Haldane won the state championship in 2014. 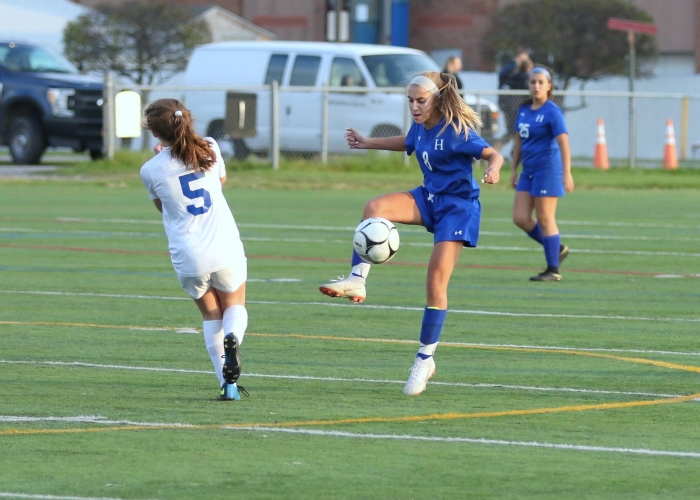 Sophia Scanga controls the ball at midfield against Millbrook. (Photo by Scott Warren)

Millbrook, the Section 9 champ, looked to be cruising toward victory on Halloween with a 1-0 lead late in the second half. But Lili Westerhuis scored on a pass from Villella with six minutes remaining to force overtime.

After the first 10-minute extra period ended with the score still tied, 1-1, Westerhuis delivered the game-winner four minutes into the second off a deflection in the box. Villella added an insurance goal on a breakaway with two minutes left.

“Being in a 1-0 hole is something we are used to,” said Coach Ed Crowe. “We’re used to coming back. Our thing is — no matter how the first 40 [minutes] go, we have enough in the tank and can run hard and do what we need in the second half.

“We won this game today with heart, grit and talent,” Crowe added. “The girls didn’t give up, they played very well in both overtimes. Lili was phenomenal, Jade was great, our defense and goalie were phenomenal. This was really a team effort, that’s why we’re moving on. I’m proud of the girls.”

Most of the action during the game was on Haldane’s offensive end. Millbrook keeper Claire Martell had 21 saves compared to five for Blue Devils goalie Abigail Platt.